You are not currently logged in. Please log in to CEUfast to enable the course progress and auto resume features.

Osteonecrosis of the Hip: Diagnosis

This Course Has Expired

Sorry, but this course is no longer active. We are keeping the course material here for research puposes. View our full course library
REQUEST THIS COURSE BE RENEWED
Author:    David Tilton (RN, BSN)

This purpose of this course is to teach healthcare professional the presenting symptoms of Osteonecrosis of the Hip, so its victims can be identified early, and guided to appropriate medical care.

Upon completion of this course, the learner will be able to:

Osteonecrosis is a disease of the bone that ultimately leads to collapse of the affected articulating joint, such as the hip. Bone is a living tissue and can die under conditions that compromise blood flow. Osteonecrosis is also known as ischemic necrosis of bone, aseptic necrosis, or avascular necrosis. If left untreated, osteonecrosis will eventually destroy the afflicted joint, requiring joint replacement surgery or total joint arthroplasty.

The word osteonecrosis is really a descriptive term made from a combination of two words, osteo = bone and necrosis = dead, which together indicate that a portion of the bone is no longer alive and cannot regenerate itself. This is most often due to a lack of blood supply.

Osteonecrosis is not a new disease. This condition of the bone has been found in Egyptian mummies and has been diagnosed in individuals worldwide. Osteonecrosis is so common that it is estimated that 10% of all hip replacements performed in the United States are due directly to the bone destruction caused by osteonecrosis. As many as 20,000 new patients each year are diagnosed in the United States alone. The societal impact of this condition is magnified greatly as it primarily afflicts individuals during their productive years (Osteonecrosis, NONF, 2005).

Bone death due to circulatory compromise can be found in every age group. In most cases, the disease is first discovered in individuals between their late twenties and early forties, with an average age of 38. Children can also be afflicted with osteonecrosis. It has been diagnosed in children ranging in age from four up. In this age group, osteonecrosis is known as Legg-Calve-Perthes Disease, or just Perthes for short (Osteonecrosis, NONF, 2005).

Osteonecrosis can be defined as Traumatic or Atraumatic. In those individuals who are over the age of 50 at the time of diagnosis, it is most likely that the condition has developed secondary to a traumatic injury such as a fracture of the hip or more rarely in association with disease of the major blood vessels to the lower leg (Osteonecrosis, NONF, 2005).

As the name implies, traumatic osteonecrosis is secondary to direct injury to the femoral head with resultant damage of the blood supply. Fracture of the femoral head or neck and hip dislocation are the primary mechanisms of injury that produce this condition. Traumatic osteonecrosis occurs in approximately 10% of all undisplaced femoral neck fractures, 15-30% of displaced femoral neck fractures, and 10% of all hip dislocations, making it a major contributor to degenerative disease of the hip especially in elderly populations (Levine, Rajadhyaksha, & Mont, 2004).

When damage is severe, artificial
replacement is an option

Atraumatic osteonecrosis occurs without an external injury. It is more common in males then females, at about a 4:1 ratio. Disturbingly clinicians have found that about 50% of those individuals diagnosed with atraumatic hip osteonecrosis are found to have bilateral involvement of the condition, as well as involvement of other bones. Many risk factors have been associated with the development of atraumatic osteonecrosis. The two most commonly associated problems are corticosteroid use and alcohol abuse. Corticosteroid use contributes to atraumatic osteonecrosis in 5-25% of patients. The third most common source is idiopathic. Other factors include such things as sickle-cell anemia, Gaucher disease, lupus, coagulopathies, hyperlipidemia, organ transplantation, caisson disease, and thyroid disorders (Levine, Rajadhyaksha, & Mont, 2004).

Hip osteonecrosis resulting from corticosteroid use is associated with the worst prognosis. Steroid-induced osteonecrosis often involves multiple bones and, in the case of the hips, results in nearly 100% bilateral involvement. When dealing with steroids, the exact dose required to induce osteonecrosis is not known; however, most studies agree that higher doses, even over a short duration, present a high risk (Levine, Rajadhyaksha, & Mont, 2004).

Traumatic osteonecrosis is a direct result of disruption of blood supply to the femoral head. The death of the soft tissue of the bone occurs rapidly, within 6-12 hours after vascular insult. The soft tissues of the bone are the bone marrow, osteocytes, and other supportive tissue. Due to the structural support of the hard calcified areas of the bone necrosis of the bone does not become apparent until some time later.

The pathophysiology in atraumatic osteonecrosis remains difficult to pin down and controversial. Only in a few specific cases, like caisson disease or sickle-cell anemia is the cause identified.

In caisson disease, where individuals are exposed to prolonged high atmospheric pressure, circulating nitrogen bubbles occlude blood vessels in response to a reduction in the ambient pressure during decompression. Sickle-cell anemia is another instance where the cause is known. Blood vessels are occluded which results in bone death following the sickling process of vulnerable red blood cells.

Many of those researchers who study atraumatic osteonecrosis are of the opinion that fat cell hypertrophy in the bone marrow, with resultant pressure increase within the femoral head, sets up conditions that lead to vascular collapse and resultant bone death. This especially applies to steroid-induced osteonecrosis. Others propose that a fat embolism phenomenon with resultant vascular occlusion is the most likely candidate for the condition. Most researchers agree that a hyperlipidemic state does seem to be related to atraumatic osteonecrosis; but, the exact cause of the condition remains largely unknown (Levine, Rajadhyaksha, & Mont, 2004). 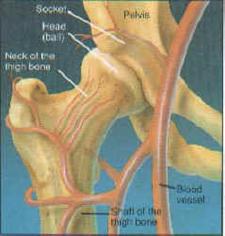 Blood arrives at the femoral head primarily from branches of the medial and lateral circumflex vessels, which arise from the femoral artery. The retinacular branches deep to the posterior capsule are the most important. Blood is also supplied from the obturator artery (Levine, Rajadhyaksha, & Mont, 2004).

The pressure that occurs in joints with normal use contributes directly to the propagation of necrosis within the affected bone. As bone death occurs, the body undertakes a process of repair that takes the dead bone away and replaces it with new bone.

During this process the bone is very vulnerable, particularly the surfaces of joints. Osteocytes are branched cells embedded in the matrix of bone tissue involved in the maintenance and rebuilding of the bone. In hips, the osteocytes of the femoral head die as the bone marrow dies. This leads to poorly managed attempts to reabsorb the dead tissue, replacing the surfaces with new but weaker osseous tissue that inevitably leads to subchondral fracture and collapse of the bone surface. In most patients, this subchondral fracture alters the articular surface of the joint resulting in abnormal mechanics such as bone-to-bone friction and arthritic alterations to the joint.

Patients often describe the pain of osteonecrosis as deep, throbbing and worse with ambulation. The pain is also present during the night, commonly preventing sleep. Symptom onset is acute, with osteonecrosis pain frequently beginning suddenly for no apparent reason. Interestingly, persons with this condition frequently describe a catching or popping sensation with joint motion. Healthcare professionals should always ask concerning a history of prior trauma, steroid use, alcohol abuse, and other frequent risk factors.

During a physical examination, pain is present with both range of motion and ambulation. A marked limitation of internal rotation in both flexion and extension of the joint are prevalent, with passive internal rotation in extension being particularly painful. A Trendelenburg gait, or pronounced pelvic tilt towards the unaffected hip, is a frequent finding.

Lab tests have limited utility in the diagnosis of osteonecrosis, with the following exceptions (Levine, Rajadhyaksha, & Mont, 2004):

Plain x-ray findings frequently are normal. This is not to say x-ray findings are to be ignored! It is just that the part of avascular necrosis of the bone that become visible on traditional x-ray are the microfractures present in the flawed healing process and are seen only in advanced stages of the disease. To detect the early stages other types of imaging studies are required. The more advanced the condition gets, the more likely it is that surgery will be required to repair the damage. Lateral or frog-leg views provide a much more indicative picture of the load bearing surfaces of the humeral head and joint. Tomograms, particularly lateral views can also be helpful; yet, the main star in imaging osteonecrosis of the hip has to shine on the MRI. Diagnostic accuracy with MRI studies of suspected hip osteonecrosis run around the 98% range, which is enough to make it the gold standard for diagnosis. Bone scans can also be used, yet when available, magnetic imaging is preferential due to its high result levels (Levine, Rajadhyaksha, & Mont, 2004).

Bone biopsy of the affected area will often reveal the presence of venous congestion, as well as histological evidence of the necrotic process. A biopsy can help determine when the injury occurred and the progress of the cellular repair. During the initial stages of the injury, histologic findings show marrow and adipocyte necrosis. Next, the process of liquefaction necrosis and interstitial edema occur. During necrosis of the osteocytes, cells with abnormal or pyknotic nuclei are present. Eventually, as the body strives to rebuild the area of compromised bone tissue, the zone of necrosis begins to be surrounded by repair tissue. This is an indication that revascularization is occurring. During this attempted repair phase, body processes reabsorb the damaged bone tissue much faster than strong healthy replacement tissue can be formed. The resulting disparity of bone density and strength weaken the supportive subchondral plate. The body’s flawed repair process leads directly to subchondral collapse resulting in abrasive texture on articulation surfaces. This roughening causes the extensive cartilage damage and other arthritic changes that are seen in both imaging studies and in biopsy.

The bone death and the subsequent damage that occurs in osteonecrosis of the hip are much more common then most health professionals realize. Any trauma to the bone that compromises circulation to the living bone tissues can lead to this condition. Vascular insufficiency severe enough to lead to necrosis of the marrow and bone producing cells has been linked to many risk factors, yet can be found in individuals with no known risk factors. Both traumatic and non-traumatic osteonecrosis is found in every age group, though the most common individuals to be afflicted are persons in their prime productive years, the 20, 30, and 40 year olds.

Cellular death of the living bone tissue progresses rapidly, with necrosis of the marrow and osteocytes, or soft tissue of the bone, occurring within six to twelve hours after circulatory shutdown. Subjective evidence of the injury to the bone unnoticed until several days latter, when groin or hip pain suddenly appears. This sudden or acute onset of pain is often the first outward indication of a problem. Sharp pain, muscle spasms, painful movement and limping or favoring of the hip, particularly by visible rotation of the pelvis, known as Trendelenburg gait, are strong indications to the health care professional that an injury to the bone is present.

During the early stages of bone death, standard x-rays and labs are small help. The gold standard for diagnosis of osteonecrosis is the MRI, which has a 98% diagnostic accuracy rate in this condition. Other bone imaging techniques are useful however, and may be included. As the condition progresses, and the body strives to repair and replace the area of dead bone, the condition can be spotted using standard imaging, with lateral or frog-leg views being the most indicative due to the presence of microfractures, subchondral collapse and arthritic processes developing in the poorly healed bone tissue.