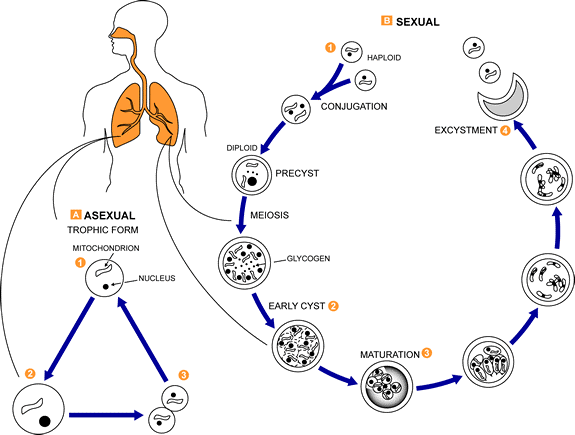 Our thanks to Dr. Melanie T. Cushion for her comments on the life cycle text.

Cushion MT, Ruffolo JJ, Walzer PD. Analysis of the developmental stages of Pneumocystis carinii in vitro. Lab Invest 1988;58:324-331. This illustration is a generalized life cycle proposed by John J. Ruffolo, Ph.D. (Cushion, MT, 1988) for the various species of Pneumocystis. These fungi are found in the lungs of mammals where they reside without causing overt infection until the host's immune system becomes debilitated. Then, an often lethal pneumonia can result. Asexual phase: trophic forms (1) replicate by mitosis 2to 3. Sexual phase: haploid trophic forms conjugate 1 and produce a zygote or sporocyte (early cyst) 2. The zygote undergoes meiosis and subsequent mitosis to produce eight haploid nuclei (late phase cyst) 3. Spores exhibit different shapes (such as spherical and elongated forms). It is postulated that elongation of the spores precedes release from the spore case. It is believed that the release occurs through a rent in the cell wall. After release, the empty spore case usually collapses but retains some residual cytoplasm 4. A trophic stage, where the organisms probably multiply by binary fission is also recognized to exist. The organism causes disease in immunosuppressed individuals.