Why Your Team Losing May Be Affecting Your Health 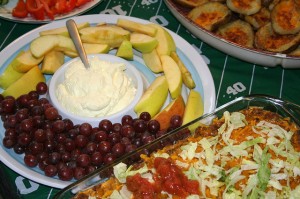 You've managed to get through the holidays without overdoing it too much, I hope, but we have yet another impending junk food trap: the Super Bowl. Ah, Super Bowl Sunday. The rivalries, the ads, the food and drink. Nothing is more exciting than a good football game to bring family and friends together in a celebratory feast; that is, until your team loses. Have you noticed that you get indigestion from more than just a bad score? You're not alone. Studies show that a losing sports team actually affects its fans' health.

Let's talk about the study first. It was conducted by Pierre Chandon and Yann Cornil and its purpose was to determine the nutritional impact NFL teams played – pardon the pun – on their fans' diets. The study included Americans living in cities home to an NFL team and cities without an NFL team. The results revealed that Americans who live in an NFL city blew their normal diet the Monday following a team loss. How much so? Losing fans added an additional 16 percent of saturated fat and 10 percent of calories to their Monday comfort binge. Americans who didn't live in an NFL city ate normally on Mondays.

But the study shows exactly what its researchers suspected: People take their sports teams so seriously, that they turn to comfort food after a loss. In fact, many people consume comfort food or alcohol throughout the game just to “help” them if their team didn't show up to play. We all seek comfort in food every once in a while, and one of the primary reasons we seek comfort in food is depression, so do people actually get depressed after a sports match? Yes.

According to Cornil, “Past research shows that when people are feeling down, they tend to consume comfort foods in order to feel better,” and that when a fan's team loses, the fan actually takes the defeat personally. That's right, when your team fumbles the football, you feel as if you've fumbled the football. When your team loses, you've lost – especially if your boisterous opposing team's fan/friend likes to rub it in your face. You're depressed, frustrated, angry, and that bag of potato chips will definitely make you feel better… sort of…

The problem is foods high in calories and saturated fats are not only unhealthy for you, but they actually don't make you feel better. Studies have also shown that unhealthy foods and alcohol might give us a temporary high, but in the long run, we end up in a greater depression, more tired, and quite irritable. There's no point in putting yourself and your body under additional duress when you've already suffered a crushing defeat.

So, what can you do? Okay, this might not be the most popular answer for you beer and buffalo wing addicts, but you really should offer healthier options during the game. In today's world, we have plenty of healthy alternatives to the traditional greasy pizza, fat-laden Buffalo wings, and salt-riddled potato chips. And while you might not be willing to give up your beer completely, at least limit yourself and switch to light beer.

Consider adding some healthier options to your game-day spread, including a fruit and vegetable platter; a healthy layered bean dip with some whole grain tortilla chips; whole grain snack chips instead of greasy potato chips; whole grain crackers and hummus dip instead of cheese; and skinless, boneless buffalo wings with a healthy sauce. You can find some healthier pizza options out there if you do your research and, guess what, you'll be surprised at how much your family and friends actually chow down your food – hey, it's free, right?!

Don't forget to include plenty of water alongside your light beer, and avoid colas if you can. They are so bad for you that it would take another entire blog post for me to give you all the reasons why. Finally, if your team does suffer a crushing defeat and you just can't get out of bed Monday without an extra-large soda and junk food value meal, put everything into perspective. Chandon and Cornil's study also revealed that if people think about the things they truly value, such as their family and friends, they tended to rebuild their self-esteem because they realize it isn't tied up in a sport's team after all!

Get More Zzzzs: Why Less than 7 Hours of Sleep Can Hurt Your Nursing Career

You may be working in the healthcare profession, but th . . .

With the New Year starting recently, maybe you’ve made . . .
RELATED

Get More Zzzzs: Why Less than 7 Hours of Sleep Can Hurt Your Nursing Career

You may be working in the healthcare profession, but th . . .