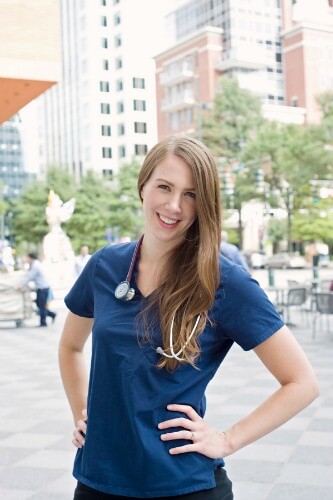 Kati Kleber is a neuro critical care RN in Charlotte, North Carolina who has practiced nursing for the last 6 years. Kleber, a married new mother of one also is a popular nurse blogger who parlayed her passion for educating younger nurses into a second career and business, with writing and speaking engagements across the country.

Her first book  “Becoming Nursey” has become a favorite among nurses with over 10,000 copies sold in the first year of publication. Her efforts have for provided transparency in the daily nurse grind as she educates young nurses on the things that just aren’t taught in nursing school.

GETTING TO KNOW KATI KLEBER

What made you get into nursing?

Kleber said she thought she was going into education during her school years, but decided she didn’t want to do that.

“My boyfriend’s sister was going to nursing school, and I really liked the medical field and teaching, and I thought nursing makes sense. I started taking pre-nursing courses, and ended up liking it a lot. I really like the anatomy and psychology, I just kind of kept going and it sort of worked out. I went straight through, getting my bachelors of science in nursing.”

Thoughts on getting that first job

“After school, I worked for two years in Illinois for Cardiovascular And Thoracic Surgical Step Down unit. The name of the game is take whatever job you can get. I was offered a couple positions and I ended up getting that job and getting my feet wet. Once I kind of figured out everything in this unit and it was like, “do I wanna stay here, or find another specialty?”

She ended up moving on to a position as a neuro critical care nurse in a Neurosciences Critical Care Unit in North Carolina, and she loves it.

“Some guy who had been in a social event was acting strangely and he wanted to drive home, but his friends said no and brought him to the ER. It turns out he was bleeding in his brain and his brain was swelling. His wife is totally freaking out. He needed emergency surgery and a part of his skull had to be removed, but in the middle of that his wife was having an emotional crisis. We had to ask her all these questions but she couldn’t pull it together to answer them, so I had to have a ‘come to Jesus’ moment with her.

She also wanted to pray with him before the surgery but her pastor wasn’t there, so I sat there and prayed with him.  He ended up passing in hospice. That was really hard.”

“Sometimes people can have brain tumors growing in their head for a long time without knowing it. I had one patient where something was happening in his brain and he was acting weird, so his family brought him to the emergency room.  We saw this huge brain tumor, and it had started pressing on his brain stem, so he went from totally fine to being on a breathing tube in the neuro ICU waiting for surgery. I hadn’t spoken to him but I had spoken to his family, everybody’s crying. I take him to surgery, he’s totally out of it, and I go home.

Then the next day, I come to work and I see this guy walking toward me with a box of chocolates. I hadn’t seem him standing up before the previous day, I was having one of those days so crazy I didn’t even have time to go to the bathroom. He gives me a box of chocolates and his daughter hands me a card saying ‘thank you for saving my dad’s life’”.

What made you start blogging?

“I graduated in 2010 and started blog in 2013. I was already blogging about family so then I thought I may as well blog about nursing. (www.nurseeyeroll.com)

When I started as a nurse, there were a lot of things I learned on the fly and I shouldn’t have had to learn on the fly, so I wanted to help nurses new to the game. So that’s how I started out and it sort of caught wind. Because when people aren’t sure how to do something, what do they do, go look it up online. I give them practical stuff, not just big, fluffy thing they learned from nursing school. “That’s why i started and it’s gotten bigger and bigger ever since. “

One of your biggest blogs?

“I wish I could cry with you but I can’t” got shared way more than I ever thought I could.

It was about about sometimes putting up an emotional wall while you take care of patients in distress, to keep sane and stable, being everything to everybody. I think a lot of people identify with it, but I also had people who had a some choice words for me.

Sometimes I have to avoid situations to avoid crying because I need to be functional. Some people are like, you are supposed to cry with patients, you’re a heartless nurse.”

Can you discuss some of the benefits that have come along with blogging?

“It’s been great connecting with nurses from all over the country and world--Australia, Canada, UK has been pretty awesome. Hearing what other nurses are going through, and getting opportunities to work with companies including Capella University, ANA, NRSNG (create all these resources for nurses where concepts aren’t clicking) and Staff Garden has been great. Staff Garden helps nurses get jobs,  they work with hospitals and do flash hiring events where they hire nurses on the spot.”

She’s also the author of Becoming Nurseyand  Admit One, What You What You Must Know When Going to the Hospital But No One Actually Tells You, both of which are available on Amazon.com.

Becoming Nursey, her first book, is perfect for new nurses, covers a lot of topics that are never covered in school, and can only be learned on the job, while Admit One speaks more to the patient’s experience, seeing as how they often have little, if any knowledge about what to expect when being admitted to a hospital.

“When someone tells a patient, I’m your attending physician, what does that mean to a lay person? They don’t understand that,” Kati says.

Her work also sparked interest in the ANA after connecting with the organization at a conference.

“I gave them a copy of my book. They said they would be interested in working on a few titles, so I pitched a few book titles and they wanted to do them all!”

One of her projects with the ANA includes a smaller guide for patients about what they can expect at their hospital stay, which would be made available to them as they’re being admitted.

“I’m also working on three others [books]. I find myself educating patients and their family members saying things over and over again as a nurse about things they never know.”

The current book she’s writing, What’s Next? is a professional development book targeted to bedside nurses.

“Most of the books out there on nursing professional development  focus on people in nurse management roles, not bedside nursing, so this book is like a Becoming Nursey part II.”

It covers how nurses can move on and plan for their professional futures after they’ve gotten their feet wet.

“I don’t have a date for the book release,but I know it’ll be sometime this year,” she said.

She previously was a nurseonality for Scrubs Magazine, and she currently works with Capella University, where she helps to promote the accelerated bachelor’s program. She is also an editor at NRSING.com and a contributor on StaffGarden, a site that helps connect nurses to job opportunities. She’s written for on allnurses.com, NurseTogether.com and of course, her personal blog NurseEyeRoll.com.

In addition, he’s been a consultant for content by CNN, US News, the Today Show and the AACN.

“I am also currently working on my second and third books  with the American Nurses Association.”

How do you balance being a nurse, your blog/business and home life?

“I’m still figuring it out,” Kati chuckles. The first time mom gave birth to baby girl Hannah Jan. 29, and she says it’s been amazing, but a lot to juggle.

“I’m still trying to get used to my new normal. I’ve had read books about efficiency and prioritization.”

Since she’s given birth, she hasn’t gone back to her previous 3-day work schedule at her hospital. Instead, she works PRN, which gives her more time to spend with her baby.

“It helps that I am also writing my books and I have some income from that and the companies I’m working with, I’m able to work from home and get stuff done.” she said.

She also has the support of her husband, who works as an intensive case manager and is getting his master’s in professional counseling.

“Sometime you’ve gotta make tough decisions, there have been a lot of things I've had to say no to, but at the end of the day, I’ve had to prioritize. I don’t want to be stressed all the time and exhausted.”

She wants to raise baby Anna, and Kati said the beautiful thing about being a nurse is, you can step away for a few years when you have kids, then jump back in once they’re in school.

Any advice for nurses who have ideas and considering starting a business?

“It can’t just be about the money.  business, I started my blog not thinking it’d turn into this. I think there has to be an underlying passion, an underlying desire. Like if you didn’t make another dollar, would it be worth it? If your goal at the end of the day is income, your followers can tell. There has to be an underlying passion.  Are you filling a need? Do your research, and make sure that you’re providing value. We’re the most trusted profession. So if you’re going to do something as a nurse publicly, be trustworthy. It’s important to do it with integrity. Having pride in that.”

What mark do you hope to leave on the nursing industry?

“I believe that the culture of safety, and open honesty, people being able to say, “they don’t know something” is important. Part of what I’m doing with NRSNG.com is making it okay for nurses to say you don’t know something; be honest about your educational needs. So if I could leave any stamp on nursing, it’s to make it okay to ask the seemingly stupid questions.”

Kati believes if nurses are made to feel stupid every time they ask questions, it can lead nurses to make important decisions they’re unsure of in order to save face.

“There is this, ‘You’re a nurse, your suppose to know this’ attitude. I want it to be, where a nurse can say, ‘I don’t know looking at the EKG where this heart attack is coming from, I know I’m supposed to but I need help,’ I want it to be okay for nurses to say that.”

A patient’s privacy should always be protected by their . . .

A patient’s privacy should always be protected by their . . .