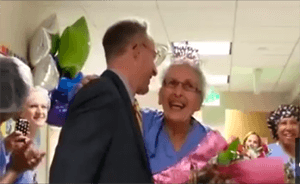 If we’ve ever needed an example of what it means to dedicate a lifetime to one’s career, look no further than Florence SeeSee Rigney---the oldest working nurse in the United States.

Florence, who everyone affectionately refers to as SeeSee, turned 90-years-young during Nurses Week on May 8.

Her co-workers surprised her for her birthday and gathered around the hospital as a camera rolled to capture the magic.

The video was placed on YouTube and went viral, with over 211,000 views and counting.

During the sweet surprise, SeeSee walked down the hall to a scrub-wearing crowd, waiting with cheers and a round of applause in her honor.

Soon after receiving a bouquet of flowers, sash and a tiara, she listened to a co-worker’s speech about how SeeSee could still run circles around everyone and inspired them everyday.

The 90-year-old’s eyes welled with tears.

SeeSee joked, saying she know she can be a pain in the butt, referring to her “no nonsense” work ethic, and said that she can’t believe she entered the world 90 years ago, before giving a heartfelt ‘thank you’.

When you realize that SeeSee shares the same first name (Florence) and the same birth month (May) as nursing pioneer Florence Nightingale, her career path almost seems kismet.

She has been a nurse since graduating from the Tacoma General Hospital School of Nursing in 1946. After graduating, she stayed at Tacoma to work for the hospital, and she’s never left.

Bill Robertson, president and CEO at the hospital said, “Even though her career has taken her across the country, and though she took time off to raise a family, she has been a part of our team on and off for nearly 70 years — about half of the years since Tacoma General was founded in 1882!”

With a career spanning across nearly decades, SeeSee has seen how improvements in technology have improved medicine and healthcare, like the switch from paper to digital medical records.

At this point, she only works two days a week as a staff nurse for Surgical Services, but her co-workers say she is very hard to keep up with.

Based on one of her pedometer readings, she walks an average of seven miles per day at Tacoma.

These days, she mostly sets up operating rooms, preparing them for the 70 plus procedures that occur in each one on average.

If it isn’t clear by now why she continues to work, she’ll happily to tell you:

"I love nursing...since I was a little girl, it was something that I always wanted to do," she said in an interview with MultiCare.

We salute you SeeSee!

Any nurses out there plan to work well beyond retirement age? Tell us your thoughts in the comments.

Welcome to the third installment of Nurse Chronicles. N . . .
RELATED