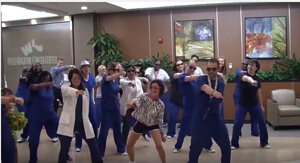 If anyone’s ever doubted whether patients are more than just a number to doctors and nurses, then they should hear the story of 12-year-old Sophia Petikas. This young patient got the surprise of a lifetime after she received a flashmob from the St. Jude’s Children’s Research Hospital in her honor.

Sophia is a fun-loving girl who enjoys dancing, but two years ago, she temporarily lost the ability to boogie when she was diagnosed with scoliosis.

It turns out she had a large tumor growing on her spinal cord, and she had to undergo a major surgery at St. Jude’s to get it removed.

A year after the procedure, she was treated with radiation and advanced proton therapy. During the course of her therapy, she befriended staff members, including her physician Dr. Ben Wilkinson, and Sophia challenged him to learn the Whip/NaeNae dance, a widely popular dance craze from Lo Silento’s Watch Me song.

Wilkinson promised her that he would learn the dance once her therapy was completed, but he did her one better.

In a moment captured on video, Wilkerson shared how happy he was that she was at the end of her treatment, and he would do the Nae Nae dance with her in the next room. Imagine her surprise when the music came on and multiple staff members got up, put on a pair of sunglasses and began to dance with her in unison.

Sophia’s mother told Inside Edition that the staff had been practicing for weeks in order to surprise their patient.

Now that’s how you get sent off in style!

Welcome to the third installment of Nurse Chronicles. N . . .
RELATED