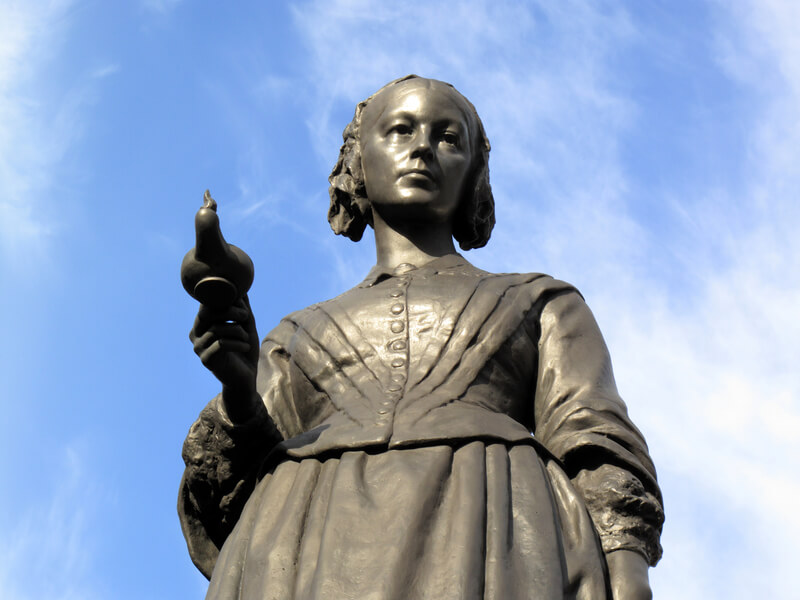 “Were there none who were discontented with what they have, the world would never reach anything better.”

These powerful words—spoken by a woman steeped in conviction to help others—were reinforced by the actions of her life. To be so ready to renounce all that had been handed to her—an eligible upbringing promising everything that a Victorian woman could desire—to reduce herself to a profession held as immodest and unsuitable for a lady of her social status required immense tenacity and self-belief. Her determination, sacrifice, and confidence are the reason we have since seen a medical renaissance in nursing practices and militaristic triage efforts. For all of these reasons and more, Florence Nightingale unarguably deserves the title “Mother of Modern Nursing.”

Florence’s decision to pursue education in the field of nursing was nothing short of selfless. Her efforts as a military nurse abroad and social reformation back home in England have reverberated to cultures the world over and continue to be the foundation of medical practices everywhere. Florence led a long and noble life, paving the way to what we now know as modern health care.

Early Life: A Call to Nursing

Florence Nightingale was born in Italy on May 20, 1820, to William and Fanny Nightingale. Florence—known by her loved ones as Flo—and her sister Parthenope were both named after their places of birth. Although she was born in Italy, Florence and her family moved back to their home country of England shortly after her birth in 1821.

Florence lived comfortably growing up. Her father inherited his uncle’s estate—Lea Hurst in Derbyshire, England—and the family spent their summers there with their primary residence being in the south-central city of Hampshire. The family also traveled frequently, often taking trips to various countries throughout Europe.

Florence was a precocious child from the beginning. Her father taught her personally, teaching her history, philosophy, mathematics, and several languages. Uninterested with the traditional female roles of the time, she preferred reading and discussing philosophy and politics with her father. In this way and many others, Florence quickly realized that she was different from other children her age.

The Nightingales were a devout Unitarian family, and Florence found comfort in her spiritual beliefs. So much so that at the age of 16, she began to receive “calls from God” about how she should serve humanity. She interpreted these calls to action as the responsibility to reduce human suffering, and she turned to nursing to meet this calling.

Today, nursing is seen as an acceptable and admirable profession for anyone to pursue—but it wasn’t always this way. For centuries, nursing was a lowly and miserable job often reserved for peasants and convicts. As a result, ethics and proper practices were absent in hospitals, which were viewed as filthy and unfit for most, especially a privileged and educated woman like Florence. For these reasons, her family found her decision to pursue nursing reprehensible. Though they tried to change her mind, Florence was determined to set out to answer her divine calling.

After a long courtship and refusal of marriage in 1849, Florence was finally able to sway her family. Her father accepted her choice and allowed her to enroll in nursing training in Kaiserswerth, Germany, in 1850. The school, headed by Pastor Theodore Fliedner, was one of the earliest institutions for proper nurse training. She then pursued more training in Paris in 1853. That same year, she returned to England to accept a position as superintendent for London’s Establishment of Gentlewomen. It appeared that Florence had realized her calling. She would soon embark on a journey that would change her life and the field of nursing forever.

Serving in the Crimean War

The same year that Florence completed her nursing training and accepted her superintendent position, conflicts broke out between European and Russian forces. The war was largely religious—the two forces were vying for religious privileges in Palestine. Many of the battles came to a head in Crimea.

Britain was a key ally in the European efforts to thwart Russian forces. As the war waged on, news returned to the home front about the appalling conditions and high death tolls in British army hospitals. In response to this news, Secretary of War Sidney Herbert appointed Florence to lead a team of 38 nurses to go to the field hospital in Scutari and aid in the reformation of the conditions in 1854.

Florence and her team arrived at the hospital and found the horrifying descriptions of the conditions to be true. The entire facility was filthy—the floors were covered in blood and feces; soldier’s clothes were swarming with bugs, lice, and fleas; and rats ran rampant across the floors. There were also no clean medical supplies; as a result, the soldiers were poorly cared for and hygiene was completely neglected.

Florence and her team immediately got to work. Under her orders, Florence’s team began cleaning the hospital and bought enormous amounts of supplies including towels, clothes, and cutlery. She also had large shipments of food brought in from England. It was later discovered that the hospital had been built on top of a sewer, so she had the Sanitary Commission of England travel to flush out the sewage and improve the ventilation of the hospital.

Florence was relentless in her care for the hospital—she worked around the clock to care for wounded soldiers and the hospital’s upkeep. Soldiers began referring to her fondly as “the Lady of the Lamp” because of her nonstop work ethic. News of her tireless efforts quickly returned home and gained celebrity amongst the population, including Queen Victoria. The Times Newspaper in London described her this way:

She is a “ministering angel” without any exaggeration in these hospitals, and as her slender form glides quietly along each corridor, every poor fellow's face softens with gratitude at the sight of her. When all the medical officers have retired for the night and silence and darkness have settled down upon those miles of prostrate sick, she may be observed alone, with a little lamp in her hand, making her solitary rounds.

Under her supervision, the conditions at the hospital in Scutari dramatically improved. Death tolls dropped and the overall morale and health of troops increased. The work that Florence did during the Crimean War also brought about some revolutionary realizations. Florence observed that the cause of the high death toll of British forces was due to the unsanitary conditions in the hospitals. Death from diseases such as typhus, typhoid, cholera, and dysentery vastly outnumbered the deaths from battle wounds. Florence kept meticulous records of all the happenings in the hospitals so that she could justify the overhaul of medical needs both at war and at home.

A Call for Reformation

Florence returned to England at the end of the Crimean War as a heroine. Instead of relishing in her new celebrity status, she decided to use her popularity as a platform for social reform in the military and at home. As one of her first tasks, she met with the queen to present her records of her time in Scutari. The extensive 800-page report, “Notes on Matters Affecting the Health, Efficiency and Hospital Administration of the British Army,” kept track of the number of deaths, their causes, and the number of staff and quantities of supplies. The report included what she called the Rose Diagram, a revolutionary concept to display the information in an easily digestible way. Moved by the report, Queen Victoria order a Royal Commission to be established, marking a significant turn in the quality of military medical care. A second Royal Commission was established shortly after to examine the public health of India, again based on Nightingale’s report. The result was a major reform in environmental and health care protocol for the country.

Florence also made great strides in shedding light on nursing practices at home. Through the Nightingale Fund, a fundraising effort organized as a token of gratitude for her work during the war, Florence established the Nightingale School of Nursing at St. Thomas’ Hospital in London in 1860. The school brought the job of nursing to the medical forefront, formalizing training and education in nursing practices and turning the work into a respectable profession. During this time, Florence even wrote a book called “Nursing: What It Is, and What It Is Not” to educate the public about the healing effects of nursing.

If it were not for Florence, we would perhaps not have the basic concepts for nursing today. It is for all of these reasons that she is now considered the foundational philosopher of modern nursing.

Florence received many accolades throughout her life. She was most notably honored with the title of Lady of Grace of the Order of St. John of Jerusalem in 1904, which is given to those who demonstrate outstanding voluntary care or relief work throughout their lives. She also received an honorary brooch from Queen Victoria for her work in the Crimean War. This award is significant because it was a sign of royal appreciation for a woman in a time when suitable decorations for female civilians didn’t yet exist. She was also the first female to be awarded the Order of Merit in 1907, which acknowledges honorable work during wartime, and the Freedom of the City award in London.

During her service in the Crimean War, Florence became very ill and was nearly sent home to recover. She persisted, however, and saw her service through to the end of the war. Unfortunately, the disease is believed to have followed her throughout her entire life. After returning home from the war, Florence spent most of the rest of her life as an invalid, reduced to staying in bed most of the time. Despite this, she remained incredibly productive, running campaigns and pioneering designs in hospital planning.

Florence lived a long life, dying in 1910 at the age of 90. Prior to her death, she was offered a state funeral and burial in Westminster Abbey, but she declined. She instead received a memorial service

at St. Paul’s Cathedral in London and requested to be buried in her family plot in East Wellow, Hampshire.
RELATED