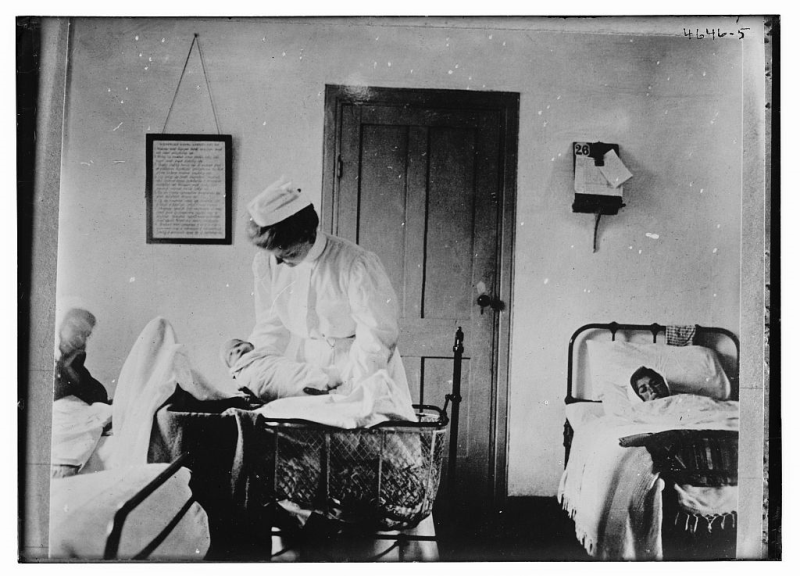 The word midwife comes from Old English, with the prefix "mid" meaning with and "wif" or "wife" meaning woman. The word itself means "with woman" and a midwife is a woman who assists a pregnant woman throughout and during her pregnancy.

The word also signifies bringing something forth, such as the new baby. Attempts to license or regulate midwifery in the U.S. began as early as Colonial America, though the role of the midwife dates back to antiquity. Midwifery was a common practice in ancient Greece, China, and Rome as well. Modern midwives are trained professionals who have undergone certification and licensing through an established or approved curriculum.

While some 21st century midwives operate in their own practices, others may work in hospital settings. Midwifery was an undisputed profession worldwide; however, during the 20th century, as science made new groundbreaking discoveries empowering more men with knowledge as surgeons and doctors, conflicts between midwives and the medical profession arose. Many surgeons and doctors felt that they were better equipped to help the pregnant woman than midwives, who often relied on folk medicine, herbs, and tradition. Though many midwives work in hospital settings, there is still a preconceived notion that midwives practice alternative medicine, while obstetricians rely heavily on science and medicine. As more midwives enter the professional world of medicine and hospital settings, these lines have become increasingly blurred. There are many obstetricians who are open to the methods suggested by midwives, and many midwives who will elicit the help of a surgeon if a labor and delivery has stalled and other methods to help a woman deliver aren't working. Where in times past the two were often seen in conflict and at war with each other, the relationship between male obstetricians and female midwives in the 21st century is often a harmonious one.

Though relations between obstetricians and midwives are often pleasant, it hasn't always been that way. There was a time when female midwives were viewed as witches due to their knowledge of herbal medicine, folk remedies, and ability to not only care for a woman throughout her pregnancy and assist in the delivery process, but also with their knowledge to terminate unwanted pregnancies. Medieval midwives had access to herbs that not only healed but could cause abortion. In the dark ages, this knowledge was considered forbidden and many midwives were persecuted throughout Europe for practicing witchcraft. It is possible that the association between midwives and witchcraft continues to linger in many misconceptions regarding the practice.

One method used in America that helped legitimize the practice of midwifery and separate it from an association with folk medicine, herbs, and witchcraft, was nurse midwifery certification. A nurse-midwife is a trained, registered, certified and licensed nurse who has also trained as a midwife. Nurse-midwifery is viewed as a valid aspect of the medical profession and many nurse-midwives have expanded focus rather than just obstetrics/gynecology. In early European countries, nurse-midwives rode horseback and brought services to underprivileged woman. Mary Breckinridge brought the nurse midwife concept to America in 1925, when she started the Frontier Nursing Service. Breckinridge delivered services to many of the nation's poor and helped legitimize midwifery in the U.S. while doing so. While the role of nurse-midwife helped professionals view midwifery as a necessary service, it should be pointed out that throughout America, there are midwives who are certified, yet are not nurses. There is also a difference between a midwife, a nurse midwife, and a maternity nurse. The main difference between each role is determined by the degree obtained.

You may learn more about midwifery, its history and current role in American medicine in the links below.