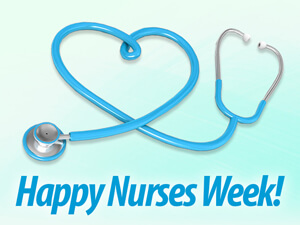 CEUFast.com would like to join the American Nurses Association in celebrating National Nurses Week. National Nurses Week was established to raise awareness of the many different ways nurses, the largest healthcare profession, are tirelessly working to save lives and improve the health of millions of patients each year.

Celebrated from May 6th through 12th, National Nurses Week ends on Florence Nightingale's birthday. Her contributions to nursing, nursing education, and hospital reforms were very significant; particularly for a woman born in the 19th century. Commonly referred to as the "founder of modern nursing", Nightingale was instrumental in improving hospital standards for wound care and sterilization. Gifted in mathematics, she used statistical graphs to illustrate how sanitization standards were killing many of the patients during that time. While better known for her contributions in the nursing and mathematical fields, Nightingale also played an important role in English feminism. In January of 1974, the International Council of Nurses (ICN) proclaimed that May 12th would be "International Nurse Day" in recognition of Nightingale's achievements.

To learn more about National Nurses Week and Florence Nightingale, please follow the links below:

Nurses Week 2015: For All the Nurses Who Rock

Nurses Week 2015: For All the Nurses Who Rock