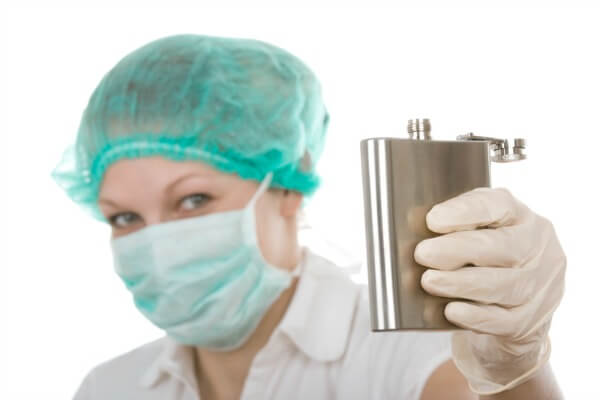 Have you ever witnessed a fellow nurse put patients in danger because they were drunk or under the influence of some sort of substance?

Without taking a formal poll from our readers, we’re pretty confident a percentage of you have, considering 1 in 10 nurses have at some point been in recovery for drug and/or alcohol addiction, according to American Nurses Today.

The topic of healthcare professionals and substance abuse is so common, it’s even a part of our entertainment culture. It was just last year that Showtime aired its final season of the comedic series Nurse Jackie-- a funny show about a nurse who was passionate about her patients, but also had a nasty dependency on Vicodin and Adderall.

While the issue is nothing new, countless cases of health professionals working under the influence typically fly under the radar.

There are several cases where a brave nurse speaks up when they see a nurse abusing substances and this helps prevent unnecessary mistakes from being made. It also prevents unnecessary endangerment of a patient’s life.

However, there are many of us who don’t say anything when we suspect a nurse of being “off”. In fact, some of us are confident that a nurse is diverting medication, or tapping into a prescription meds by other means, but our lips remain sealed.

While our reasons for turning a blind eye aren’t always the best, they’re relatable.

And a host of other arguments that likely have make a valid, or semi-reasonable point.

Here’s the thing: it’s sometimes is easy to forget this, but we’re in the business of being healers and saving lives.

It’s not always easy to speak up, but it certainly isn’t easy to learn about a patient who took a turn for the worst in a scenario where you could have easily intervened, but chose not to, in favor avoiding feelings of discomfort or inconvenience.

We encourage nurses to always advocate for the patient and either confront the nurse or discuss your concerns with a manager.

If you do notice that something isn’t right about a co-worker, but you’re not quite sure, do the following.

Do a Bit More Research on Impaired Nurses

Most functioning alcoholics/drunk users try to be as inconspicuous as possible, making it a point to abuse substances before work or during breaks. Drinkers will use mint, gum and beverages to cover up alcohol on their breath.

So once you can actually begin to tell that a nurse is using/abusing, they’re more than likely in an advanced stage of addiction.

If you aren’t feeling confident about your observations, brush up of the signs and symptoms of substance abuse. CEUfast has a great 2 hour CE course  called Recognizing Impairment in the Workplace.

Medscape has a great chart of the physical signs, symptoms and behavioral changes to look out for, click here to take a look.

Look into Your Job’s Policies

Once you feel more certain about your observations, research employer’s policy on health care professionals caught abusing drugs or alcohol. While nurses caught abusing substances might lose their license for a year if they’re considered a danger to patients, at least 37 nurse state boards have a substance abuse treatment program for healthcare workers designed to treat them and facilitate them get their jobs back.

The treatments often include in treatment or outpatient detoxification, education about the disease, a form of therapy and a relapse prevention.

Nurses who undergo these programs have an extremely high success rate due to excellent rehabilitation programs and getting monitored as they re-enter nursing.

The take away here should really be that by intervening, you are not only protecting a patient, you are helping the nurse in question.

As you likely already know, putting an end to substance abuse will improve the nurse’s health, add years to their life, reduce or improve mental health conditions, improve their relationships, and most importantly, protect others who they would otherwise endanger on the road, in the hospital or elsewhere.

Treatment will also likely provide the impaired nurse with the opportunity to address the issue that may have led to substance/alcohol abuse in the first place.

Don’t settle for ignoring the problem. Be the brave  co-worker who saves a drunk nurse from possibly making a mistake he’d regret.

Save yourself from thinking about what you “should have done”.

A nurses, is in a key position to help reduce America’s . . .

A nurses, is in a key position to help reduce America’s . . .