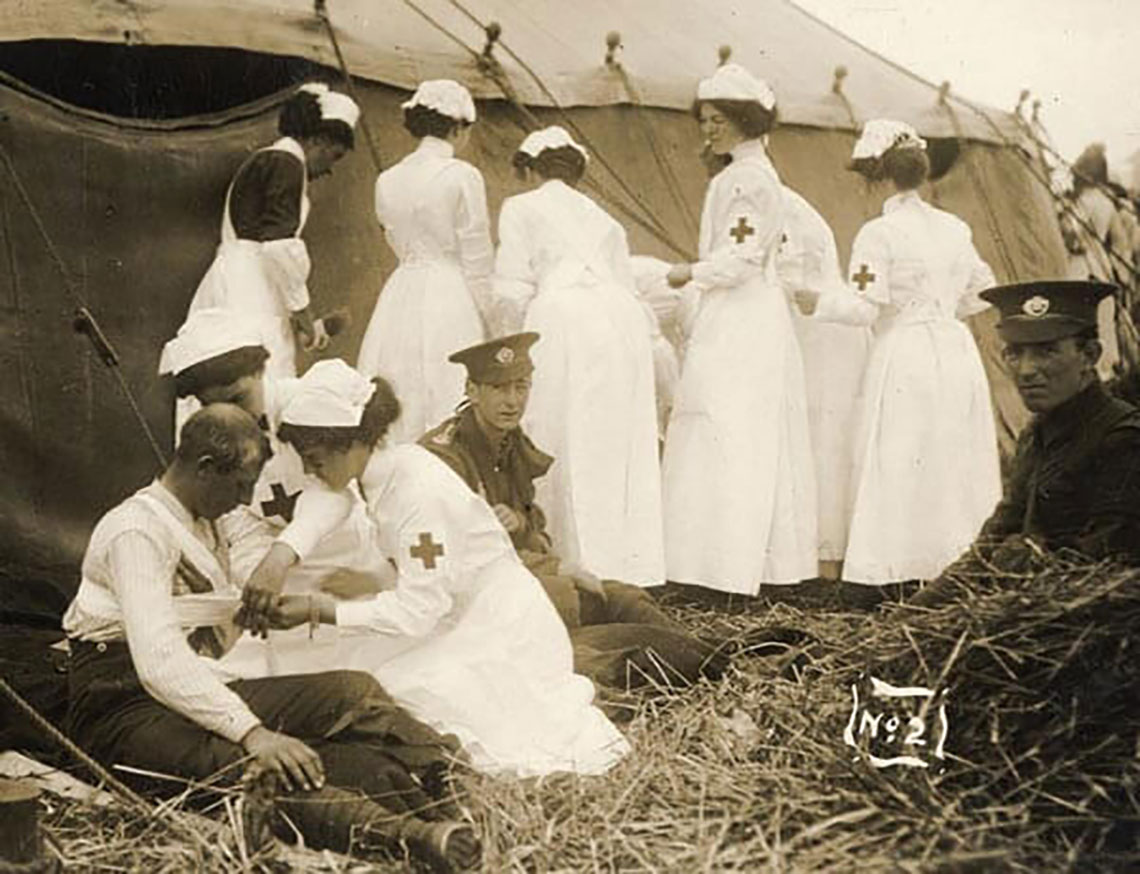 World War I was a profound event that played an important role in the placement and future advancement of women within the military. It demonstrated not only that women were capable of duties supporting active military troops, but also that their own enlistment in the military was invaluable in multiple capacities.

This is particularly true when looking at nurses and the service and care they provided the US military during WWI; both the Navy and the Army allowed women to become more mobilized than ever before.

According to the United States Army, the Army Nurse Corps had approximately 403 nurses who were active at the onset of the war and roughly 170 nurses in the reserves. Within a month of the US entering WWI, some of the nurses who would serve overseas were sent to Europe. This was in advance of the troops and allowed them to set up base hospitals alongside British medical personnel.

In October 1917, some six months after their arrival in Europe, nurses began serving with the American Expeditionary Forces upon the request of General John J. Pershing. The number of nurses rose significantly as women enlisted by the thousands, and by the last year of the war there were approximately 12,000 active nurses from the Army Nurse Corps serving across the world. By November 11, 1918, there were some 21,480 enlisted nurses serving, with more than 10,000 of them stationed and serving overseas in places like France, Belgium, England, Siberia, Italy, Serbia, Hawaii, Puerto Rico, and the Philippines.

The Red Cross was another major contributor when it came to nurses in WWI. Much of the care for American servicemen came from the Red Cross, which served as a nursing reserve to the navy and army.

Although they were fighting a unified cause to serve their country through medicine, this wave of nurses varied greatly. “In the beginning U.S. Army nurses were U.S. citizens, female, unmarried, between 25 and 35 years of age, Caucasian and graduates of training schools,” says the Army Nurse Corps Association. By the time the war drew to a close, the requirements weren’t so restricted. Medical leaders realized that in order to meet the needs of the soldiers, exceptions would need to be made. They began to recruit less experienced nurses, a controversial move that is still debated today.

In order to truly understand the contributions and experiences of these nurses, it’s essential to consider what they faced on the sidelines of WWI. Whether it was their day-to-day responsibilities, adapting to new forms of medical care, or working under extreme conditions, these nurses’ sacrifices are an important part of medical history.

Duties on the front lines

While in service, nurses carried out a number of critical functions outside the usual realm of nursing. Their presence served not only as a strong medical force but also as a source of emotional care and an all-hands-on-deck approach to fighting the fight.

Nurses treated patients near or just behind the front lines at field hospitals, evacuation stations, or clearinghouses—even in churches that were turned into hospitals. They could be found at base stations, which were generally far removed from battle; however, they also served in troop transports and transport ships. Some nurses even drove ambulances.

These nurses treated numerous types of wounds, as well as infections and mustard gas burns. They were also faced with soldiers suffering from emotional injuries, including shell shock. Some were trained in social work, including psychiatric training, in order to help current soldiers and those returning home deal with their experiences. According to the American Red Cross, “many of the Red Cross nurses and well over 2,000 nurse’s aides, physicians, and dieticians served in military and veterans hospitals.”

In contrast to the services provided in the field, nurses in America picked up the slack despite so many nurses and medical professionals leaving for the war. Some of them filled regular positions at hospitals while others worked within emergency services and natural disaster efforts. This was just one small aspect of the role women played in the war, which also included organizing recreational activities for soldiers and taking on roles previously completed by men, such as transportation and machinery work.

It’s impossible to discuss nurse’s duties without acknowledging the calming presence these women gave to the soldiers. In one nurse wrote in her journal, “One very quiet man told me swearing was not his habit but he swore as much as any man when shells were coming over. ‘It helps one to bear it quite wonderfully,’ he said.” The woman on the medical front lines got an inside look at the perils of the war and witnessed first-hand the impact of this global conflict.

The nurses of WWI provided care beyond their original call of duty. Their contribution to the front lines, and at home, helped shape the unity and strength our country gained during the war.

World War I brought about many changes that led to new advances in medicine and modern medical practices. Whether it was reformed cleanliness standards, new medicines, updated triage practices, or anesthetic, nurses and their medical officers did what it took to meet the needs of the soldiers.

The importance of cleanliness and its association with reduced infections was a major step forward in the saving of lives. Considering the nature of soldiers’ wounds were more prone to infection that those seen in a normal hospital, infection was rampant. Bullet wounds and outdoor exposure, combined with the added hardship of not having antibiotics, made for risky work. This was not a uniquely American experience; Russian medical professionals were known to fill wounds with salt or iodide until the soldiers were able to access more stable treatment.

The medical staff also had to adapt to trench warfare and the ailments that came with it. Factors like proximity, weather, dirt, and “trench fever” created the perfect recipe for sick soldiers. Soldiers would go through feet inspections to monitor “trench foot,” a condition in which constant dampness caused feet to swell and rot. Other cold-like symptoms caused by trench warfare were treated with dissolving gelatine pills.

Blood transfusions were another relatively new resource during this time, and various medicines were used in the care of the wounded. Dakin solution, for example, was an antiseptic solution made using diluted boric acid and sodium hypochlorite. It was used to irrigate wounds before closure. Other medications included cocaine hydrochloride—used as a local anesthetic—and chloroform—used as both a general anesthetic in surgeries and a sedative. For pain, some of the common painkillers or analgesics used at the time included sodium salicylate, elixir of opium or opii tinctura camphorata, and morphine sulfate.

Triage was another developing facet important to the medical strategies nurses carried out. While the process of triage was introduced decades before, nurses became much more systematic in their approach. Tactics varied by country, but British soldiers created a three-part system to categorize soldiers into degrees: (1) wounded soldiers requiring minimal care before returning to the front lines, (2) more seriously injured soldiers in need of hospital attention, and (3) soldiers expected to not live despite medical treatment.

Before soldiers even reached hospitals where triage took place, however, there was a multi-step process to get them from the battlefield to the hospital bed. First, they would be taken on a stretcher to a regimental aid post, then a motor ambulance would take them to a casualty clearing station, and from there a hospital train would take them to a base hospital.

Another change that occurred in the nursing field was the ability of nurses to administer anesthetic. Originally, this responsibility was reserved for medical officers. This not only added immense value to the care provided by nurses during the war but also changed the speed and process required to keep up with the wounded. According to the Army Nurse Corp Association, “American nurses served on shock, gas, orthopedic, and surgical specialty teams where they could be moved to the front lines in groups of five or six. These teams could help stabilize soldiers who otherwise would have to endure long evacuation processes to reach this type of care.” The weapons and warfare during WWI evolved, and nurses and medical officers made the necessary changes to keep up with the care demanded by the war.

The Thomas Splint, invented in Britain, was a medical innovation that saved countless lives. The splint required at least two, ideally three, people to apply it to a soldier’s leg, and was completed in a twelve-step process. According to researcher Louise Bell, the splint reduced the mortality rate associated with fractures from 80 percent to 20 percent in 1918.

These advances in medical technology and practice were unforeseen blessings from WWI.

Challenges in the field

Besides the unfamiliar medical needs the war presented, there were other challenges nurses faced. As Paul E. Stepansky, PhD, states, “What makes the nurses of World War I gallant is that so many of them were able to bracket their encroaching horror, with its undercurrents of anger, depression, and numbing—and simply care for their patients. They were able to function as nurses in a nurses’ hell.”

The working conditions for nurses overseas were generally poor. Typically, nurses had to adjust to many things that were uncomfortable or limited their ability to provide care. Long hours (14- to 18-hour shifts), extreme cold, and poor weather conditions were just a few of the adjustments that needed to be made, along with seeing and treating severe and often horrifying injuries with minimal equipment. Nurses faced other difficulties as well. For example, nurses serving the Army were not afforded the status of officers. At times, this created a problem for nurses treating patients, as their authority was undermined or outright not accepted by some, particularly medics.

Another major hurdle for nurses was also a deadly one. Near the end of the war in 1918, nurses and the rest of the world were faced with a large-scale flu epidemic. This epidemic was deadlier than the war itself and was responsible for a majority of the deaths involving nurses. During WWI, over 200 army nurses died while in service and 36 navy nurses. By the end of the war, nearly three hundred Red Cross nurses had also lost their lives.

Nurses received awards for their service in the war, although some awards were given posthumously. Twenty-four nurses were awarded the Distinguished Service Medal, 28 received the French Croix de Guerre, and the British Royal Red Cross was awarded to 69. The Army's second highest award, the Distinguished Service Cross, was also awarded to two nurses, and the Navy awarded Navy Crosses to four of its nurses.

Nurses were an undeniably important part of the deadly and bloody war that was World War I. Their skills helped save the lives of countless soldiers, and their mere presence served as a balm to many of the injured and dying. The efforts and accomplishments of these brave nurses also began a forward advancement for women who were not nurses the world over, on and off the battlefield.