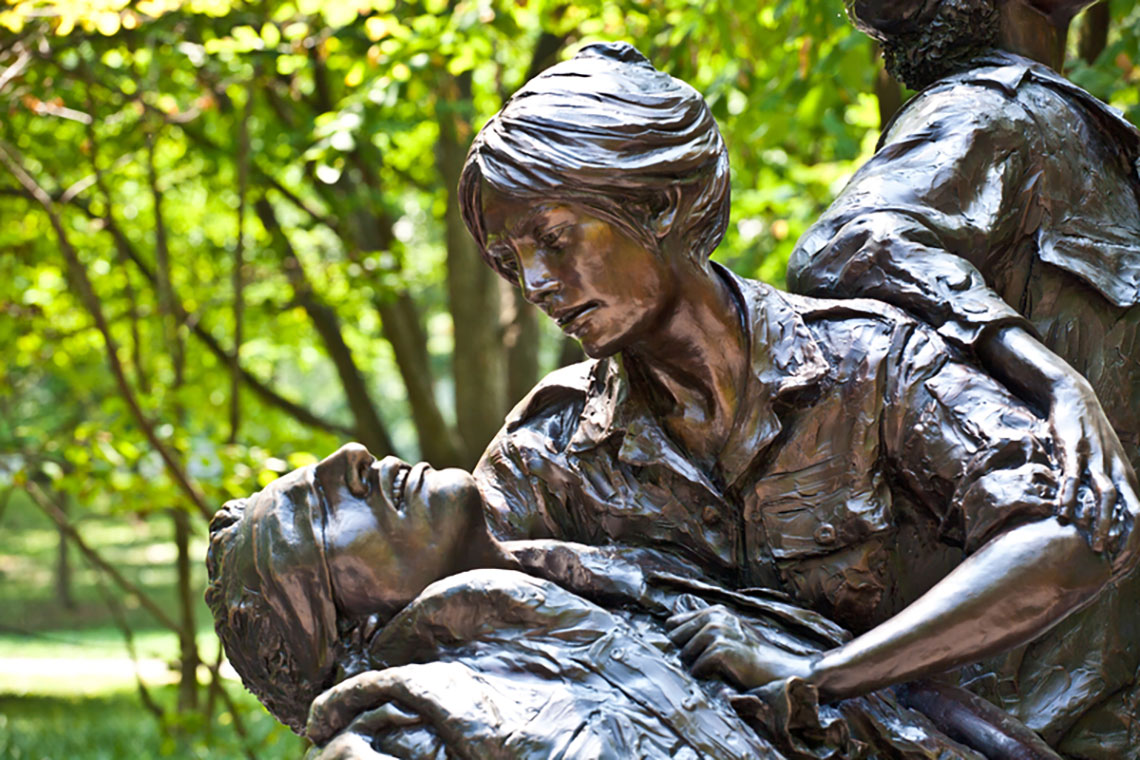 In 1956, Majors Francis Smith, Helen Smith, and Jane Baker arrived in Saigon to serve with the United States Military Assistance Advisory Group’s Medical Training Team. Their assignment was to train the local Vietnamese in modern nursing techniques to assist in the escalating civil war. These three were the first American service women to serve in Vietnam.

As the U.S. increased its involvement in Vietnam, more American nurses would come to serve alongside the soldiers.

“We aren’t angels,” said Lt. Col. Shirley A. Purcell. “We are simply members of the nursing profession who have seen the need in Vietnam and are here to do our part.” Purcell was one of more than 5,000 nurses who served during the Vietnam War, at the time America’s longest foreign engagement.

Nurses in Vietnam ranged from the new to the seasoned, though the average age of service was 23.6 and 65 percent had less than two years nursing experience. While nurses were predominantly female, 21 percent were male, and the Vietnam War was the first war in which male nurses served as officers in the Army Nurse Corps.

Long workdays were the norm in Vietnam. A nurse could typically expect to work six days a week, twelve hours a day, though emergency situations could easily force them to work through the night. But even off duty, nurses continued to work, volunteering to treat the Vietnamese civilians. Army nurses established and staffed public clinics, performed immunizations, taught courses, and visited orphanages.

As for why they served, reasons were as mixed as for the soldiers. Like the public at home, nurses were split as to moral support for the war. Some served out of a patriotic sense of duty, others for the chance at an adventure. Former army nurse Edie Meeks remembers, “I have two younger brothers. One was in the Marine Corps and one was draftable age. I figured someone who wanted to be over there should take care of them, so I volunteered to be in the Army Nurse Corps, as did all the nurses in Vietnam.”

Adapting to change on the battlefield

Combat in Vietnam was different than in previous wars. Rather than a fight between nations with clear boundaries, flags, and uniforms, the war in Vietnam was a civil war. It wasn’t a matter of seizing territory from a clear enemy; there was no battlefront. This meant that even a hospital could become part of the battleground, and sometimes it did.

Fortunately, Vietnam saw the arrival of a form of transportation previously unavailable on the battlefield: the helicopter. Not only was the helicopter able to deliver troops to land inaccessible by plane, but it could remove those troops as well. Soldiers who would have died on the battlefield waiting for medical aid to reach them were now able to reach a hospital, sometimes within a half hour of their injuries. Thanks to this and updated nursing techniques, the hospital mortality rate dropped to 2.6 percent per thousand patients, compared to the 4.5 percent rate of World War II.

Inspiring progress off the battlefield

Further, the Vietnam War saw the emergence of trauma care specialization and shock and trauma units. This specialized care abroad came to influence care at home, as greater attention was paid to those returning soldiers struggling post-traumatic stress.

Even in times of war when we expect humanity to be at its worst, we see people performing at their best. The nurses of Vietnam helped change not only the lives of the soldiers they treated, but also the world that those soldiers returned to after the war.

“Celebrating the Nurses of the Vietnam War”

“Women in the Vietnam War”

“The Women of the Army Nurse Corps During the Vietnam War”

“Vietnam War nurse: ‘I saw people do stuff they’d never do at home”

“Military Nurses in the Vietnam War”

uploads/2014/01/Evolution.pdf">AS REAL AS IT GETS: The Evolution of Trauma Care and Emergency Medicine”
RELATED

Within a month of landing on the beach in Korea in 1950 . . .
Tweet
Older Posts Newer Posts