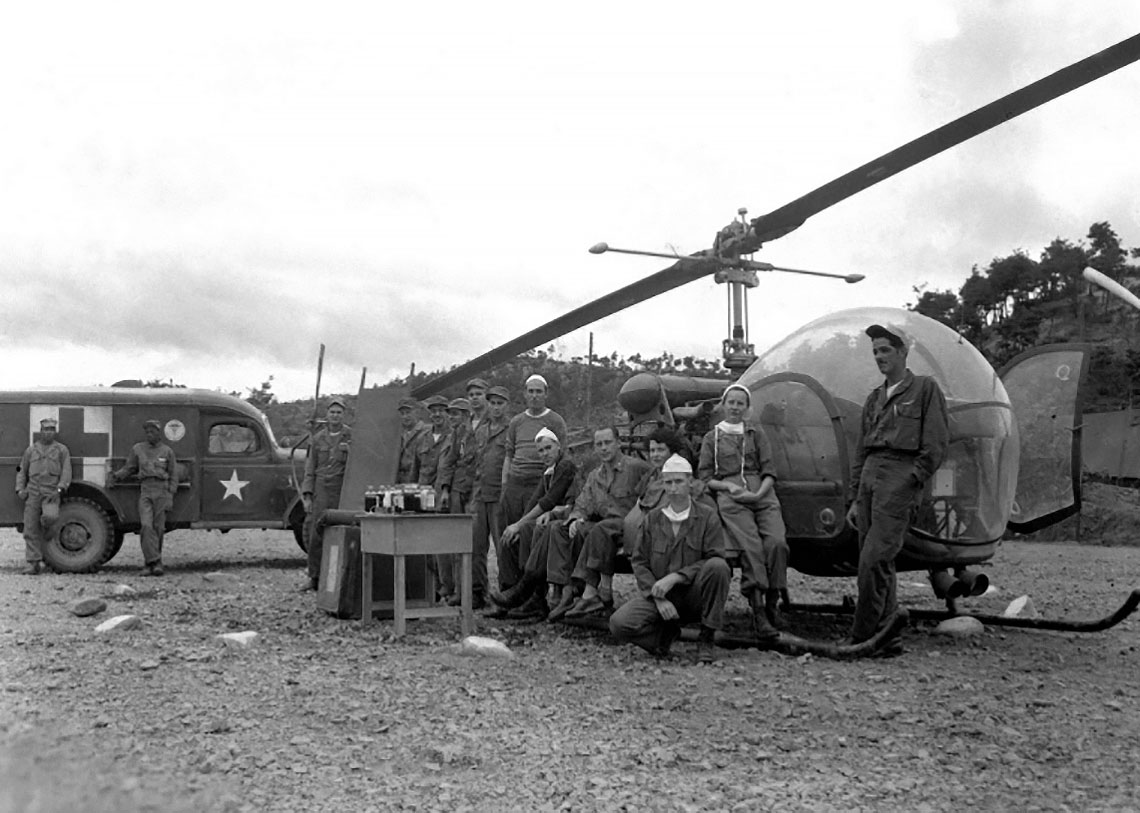 Within a month of landing on the beach in Korea in 1950, nurse Margaret (Zane) Fleming and her fellow nurses with the 1st Mobile Army Surgical Hospital were attacked. The group of 13 Army nurses was traveling with the 7th Infantry Division from Incheon to Pusan when enemy forces ambushed them. They ran to a nearby ditch to take cover and watched as gunfire and burning vehicles lit up the sky. At sunrise they ventured out and went to work, treating the wounded. Eight men died, and some of the supply vehicles were lost. None of the nurses were injured.

Because of nurses like Fleming, traveling with troops and working in MASH units, wounded people survived. During World War II, the fatality rate for seriously injured troops was 4.5 percent; during the Korean War, it was reduced to 2.5 percent.

“The wounded soldiers in Korea had a better chance of recovery than the soldier of any previous war," said Matthew B. Ridgway, commanding general of the United Nations forces in Korea. "This was not only by virtue of improved medical treatments available at all echelons but also in large measure because of his ready accessibility to major medical installations.”

Battlefield medicine changed for the better during the Korean War, leading to better medical care for everyone. With Fleming and other nurses on the front lines, advancements in treatment, transportation and MASH units, medical personnel were able to save countless lives.

The Nurses in Korea

During the Korean War, nurses served in MASH units, on board hospital ships, on MEDEVAC aircraft, and in hospitals in Japan. Nurses were all women, as the formation of the United States Army Nurse Corps in 1901 banned men from serving as military nurses until 1955. Men who worked professionally as nurses served in the military during this time, but were never assigned to nursing.

About 7,000 women served as health care professionals during the war, and it's estimated that about 1,500 nurses served tours of duty on the Korean peninsula. At the time, women weren't allowed on the front lines in combat roles, but these nurses served close to the front lines,  and sometimes, like Fleming, in the line of fire. In fact, female nurses were the only military women allowed on the Korean peninsula during the war.

“The nurse must be armed to fight just as the soldier, sailor, or marine,” said Mary C. Quinn, a first lieutenant when she served in the 8055th MASH unit. “The nurse’s weapons are knowledge and skills that can be employed to wage war on disease and injury wherever these calamities have laid low a man, woman, or child."

Nurses were some of the first military members on the peninsula. Four days after US troops arrived, 57 Army nurses landed and set up a military hospital in Pusan. Two days later, a dozen nurses established the 8055th MASH—the unit upon which the book, movie, and television series M*A*S*H was based—at Taejon. Within a month of the troops' arrival, more than 100 nurses were stationed in the Pusan perimeter.

Though not in combat, these nurses saved countless lives while living and working on or near the front lines. Because of their proximity to fighting, they did much more than regular nurse duties—they started blood transfusions, sutured wounds, administered antibiotics, conducted triage, and more. They even treated Korean civilians when they were caught in the crossfire. By the end of the war, Army nurses had received nine Legions of Merit, 120 Bronze Stars, and 173 Commendation Ribbons.

Medical professionals made significant changes to the way they treated injured troops during the Korean War, which led to fewer casualties as well as medical advancements for civilians. The war set the stage for how medical professionals treat trauma patients today.

"With each war, we saw a little improvement and expansion in the role of women," says Army Nurse Corp historian Lt. Col. Nancy Cantrell. "Women had been mostly limited to personnel and medicine, but the Korean War was a wake-up call for women in that those roles were really beginning to expand in the civilian world. They really were the pioneers of trauma care and nursing."

Transporting blood and blood banks weren't new concepts at the time of the Korean War, but it was during the war (1950–1953) that the military adopted plastic bags for storing, shipping and administering blood. Before this, blood was stored and transported in glass bottles. But these bottles had to be refrigerated before storing blood, and occasionally the blood had to be thrown out because of hemolysis. Glass bottles took up space in transport and broke easily. During the Korean War, the military started using plastic bags for blood—a method later adopted around the world.

With the routine use of vascular surgery during the Korean War, doctor's reduced the amputation rate from vascular injury to 20.5 percent from 49.6 percent during World War II.

At the 11th Evacuation Hospital in Korea, doctors used a Kolff-Brigham Artificial Kidney to stop renal failure and prevent death. As a result of improved resuscitation and treatment practices, .5 percent of patients suffering from shock stayed alive long enough only to end up with acute renal failure because of myocardial potassium intoxication, fluid volume overload, or both. Ninety percent of these patients died until doctors started using dialysis in 1951—and the death rate decreased to 53 percent. Nurses at the 11th Evacuation hospital were among the first to use an artificial kidney machine to treat patients with hemorrhagic fever.

Another reason for the reduced fatality rate of seriously wounded troops in the Korean War was improvement of transportation. Ever wondered when or how helicopters started being used for fast medical transports? It was during the Korean War. The use of medical helicopters “fundamentally changed the Army’s medical-evacuation doctrine," said Army Maj. William G. Howard. Helicopters had been used for medical transportation before 1950, but it was during The Korean War that it became routine, partially out of necessity. In Korea, the terrain was rugged, the roads were poor, and the battle lines shifted. Transporting wounded patients via ground was slow, if not impossible.

During the war, medevacs carried more than 20,000 injured people. One of the pilots, 1st Lt. Joseph L. Bowler, flew 824 medical evacuations during 10 months. The quick transport of wounded people saved many lives. The Eighth Army surgeon said that of 750 critically wounded soldiers evacuated on February 20, 1951, half would have died without medical helicopters. The success of medical helicopters during the Korean War led to their continued use by the military as well as civilian hospitals around the world.

Working hand-in-hand with medical helicopters, Mobile Army Surgical Hospitals saved wounded troops all over the Korean peninsula. A seriously injured soldier brought to a MASH unit had a 97 percent chance of survival after being treated. So what was so extraordinary about these units?

The Mobile Army Surgical Hospital units started as 60-bed tent-based mobile hospitals. Each unit was a small, fully equipped hospital that moved with the troops, sometimes as often as once a month. They were first manned by 14 doctors, 12 nurses, one warrant officer, two medical service corps, and 97 enlisted troops. However, as the war continued and MASH unit needs grew, they sometimes added surgical technicians, orthopedic surgeons, more nurses, and others. The hospitals also grew. With so many wounded people, MASH units expanded to up to 200 beds.

Mobility was perhaps the most demanding challenge. MASH units were required to be packed up and ready to move at six hours' notice. Upon reaching a destination, they needed to be fully operational within four hours. The Army demobilized the last MASH unit in 2006. However, mobile battlefield medicine continues—its successor is called the Combat Support Hospital.

Doctors and nurses working in MASH units were often overwhelmed by the influx of injured troops. The 8076th MASH unit treated 15,000 patients between July 1950 and May 1951, in 13 locations. Otto Apel, a MASH doctor, remembers, "Seventy-two hours after I had arrived at MASH 8076, I had lost the sense of feeling in my feet. I do not think I had spoken to anyone ... for at least twelve hours.” He had performed non-stop surgeries for 80 hours as his first assignment upon arrival.

There also was downtime, and because many of the doctors were draftees (i.e., civilians), they were more relaxed than a regular military hospital. One of the doctors at the 8055th MASH was H. Richard Hornberger, who later wrote the best-seller MASH about his experience. It later became an Oscar-winning movie and television show.

MASH units location contributed to their success. They provided trauma care within 10 miles of the front lines. Staff set up the truck-based units in support of each division, in forward locations just out of enemy artillery range.

Medical professionals and others worked in seven MASH units during the Korean War, though all seven weren't active for the entire period. With trauma care located within minutes of the battlefield, doctors and nurses saved many lives.

Battlefield medicine not only changed for the better during the Korean War—it also led to advancements still used in medicine around the world. Because of brave nurses on the front lines, improvements in medical treatment, transportation changes, and MASH units, troops’ survival rate and ability for recovery was greatly improved.

Learn to recognize the signs of PTSD so you can get hel . . .
Tweet
Older Posts Newer Posts