Stories to Tell around the Hospital Campfire 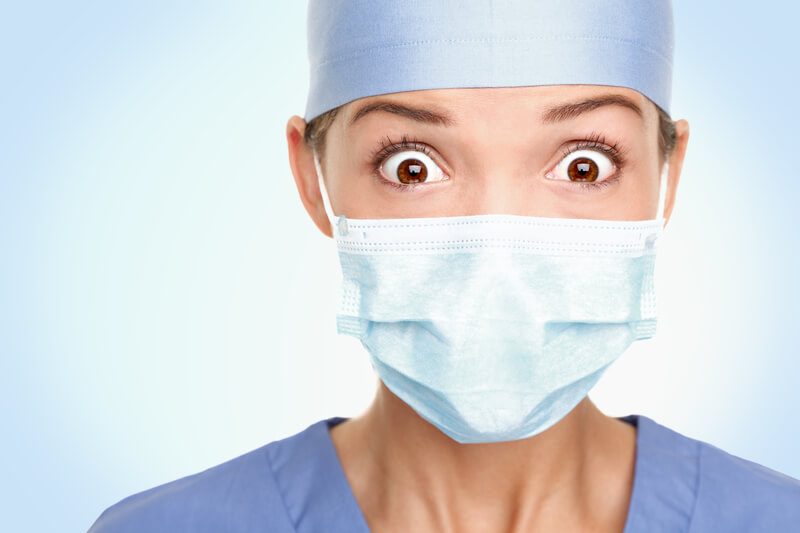 Working in a hospital, you’re bound to see some interesting things. Maybe miraculous, maybe terrifying, but occasionally just strange. You surely have your own stories to share around the campfire, but here are just a few to get you started. And, believe it or not, they’re all true.

In this time of modern medicine and vaccines, Americans . . .

Not a Moment Too Soon

In 2009, Colleen S. Burns was admitted to St. Joseph’s Hospital Health Center’s emergency room after a drug overdose. Following a cardiac arrest, doctors pronounced her dead, and Burns’s family gave permission to take her off life support and remove her organs for transplant. Just as they wheeled her into the OR, though, Burns opened her eyes. She was alive.

The case is less “miracle” and more “gross negligence.” Doctors misread her drug-induced coma as irreversible brain damage. They either ignored or missed other signs that she was still alive, including a positive reflex test by a nurse, flared nostrils, and moving lips and tongue. She even seemed to be breathing independently of the respirator she was attached to.

Most troubling of all, a nurse gave the supposedly dead Burns a sedative before sending her to the OR to have her organs removed. “It would sedate her to the point that she would be non-reactive,” says Dr. David Mayer of New York Medical College. “If you have to sedate them or give them pain medication, they're not brain dead and you shouldn't be harvesting their organs.”

The state Health Department fined St. Joseph’s $22,000 for this and other mishandled cases.

Most children wish they’d grow up faster, and most adults wish they could slow down. Brooke Greenberg is the only person to have ever stopped aging at all. When she died in 2013, Brooke was physically and mentally a toddler. She was 20 years old.

Doctors have spent years trying to determine the cause of Brooke’s condition, which they dubbed “Syndrome X.” Hers was the first case to receive widespread attention, though similar cases have since been identified, and doctors are still at a loss for an explanation. “She literally is the fountain of youth,” her father said before her death.

Boston resident Carol Keegan needed a kidney transplant and fast. The donor list was too long, so she naturally turned to her children. After a blood test, though, her doctor called her with even worse news: none of her children were blood matches. In fact, they weren’t her children at all.

But of course they were! After all, Keegan had carried, birthed, and raised each one of them. Faced with the doctors’ questions and suspicion, Keegan recalled a thyroid nodule she’d had removed in the past.

Except that Keegan didn’t have a twin sister. Not anymore, anyway.

The doctors discovered that Keegan was a chimera: While in the womb, Keegan and her twin’s eggs had fused, becoming a single fetus carrying two distinct strands of DNA. Only 30 cases have been confirmed worldwide, but many more may exist. Chimeras are only ever identified by accident, like Keegan was. You could be one and go your entire life without knowing.

What’s the longest you’ve gone without sleep? Maybe you were cramming for an exam, up all night with an emergency shift, or forcing yourself through another marathon of the extended-edition Lord of the Rings trilogy. Vietnamese farmer Ngoc Thai has you beat: he hasn’t slept in over 40 years.

In 1973, Thai came down with a fever. He hasn’t slept since. That isn’t for lack of trying, mind. He’s tried everything from medicinal sleep aids to folk remedies to liquor. Nothing has succeeded in knocking him out. And aside from some “diminished liver functions,” he’s been diagnosed as ailment free. He’s still actively engaged in his work as a farmer, carry two 110-pound sacks home every day. He uses the extra time at night to repair his property and get ready for the coming day.

You’ve probably heard the urban legend about a woman suffering from an ear infection or a boil in her ear. She does a little poking around, only for the infection to burst and spit out a swarm of baby spiders.

We hate to say it, but this urban legend has come true more than once. In 2013, Rochelle Harris returned to Britain from Peru with splitting headaches, facial pains, and discharges from her ear. And could no one else really hear that scratching sound? Finally, enough was enough. A visit to the hospital revealed the culprit: a writhing mass of maggots.

The New World screwworm fly (Cochliomyia hominivorax), now extinct in North America, seek open wounds in which to lay their eggs. “Within 24 hours, the eggs hatch into tiny larvae that feed on living tissue and bodily fluids, according to the Food and Agriculture Organization of the United Nations.” Harris had run into the pests in Peru but hadn’t given them a second thought until doctors were pulling them out of her ear canal. Fortunately, she got off without any lasting ill effects.

Pull the Other One

In 1995, heavy-equipment operator Willie King underwent an amputation to treat his diabetes-related circulatory disease. The amputation was supposed to take his right leg below the knee. King awoke hours later to find himself a dozen pounds lighter, but not the in the way he had hoped: the surgeons had taken the wrong leg!

Brandon Connor was still in the womb when doctors noticed a lump growing near his spine. At only five weeks of age, he was diagnosed with neuroblastoma, “one of the deadliest forms of childhood cancers.” Doctors monitored the lump for two years, but it didn’t go away, so parents Kristin and Mike Connor decided to risk surgery to save their son’s life. The Connors traveled from Atlanta to San Francisco for the operation. They packed their clothes, toiletries, everything . . . except for the tumor. On the eve of the surgery, where once a cancerous growth had threatened their son’s life, a scan showed nothing but fatty tissue. The tumor was gone.

Since then, the Connors have raised money for children suffering from similar conditions as Brandon. “We were given a miracle to help these other children,” Kristin says.

Learning a second language as an adult takes work, study, practice, and dedication. Or you can substitute all that with a near-fatal injury. At least, it worked for Ben McMahon, the 22-year-old Australian who woke up from a coma speaking fluent Mandarin.

McMahon had previously studied Mandarin in school but only ever reached beginner-level fluency. One car accident changed all of that, though. Upon waking up in the hospital, McMahon spoke to his Asian nurse in perfect Mandarin and wrote in in Chinese characters, “I love my mom. I love my dad. I will recover.” His English returned to him after a few days, much to his family’s relief. He’s since studied commerce at Shanghai University and found love on the Chinese dating show If You Are the One.

Teacher Erica Nigrelli suffered a seizure while between classes at school. Her coworkers tried to revive her and paramedics rushed her to the hospital. Upon her arrival, though, doctors couldn’t find a pulse. Unable to save the mother, they turned their attention to her daughter—who wasn’t due to be born for another three weeks.

Doctors delivered Elayna Nigrelli by emergency cesarean section. It was a bittersweet victory—That is, until Erica’s heart started beating again. Erica spent the next five days in a medically induced coma, and doctors diagnosed her with a condition she hadn’t known she’d had. Hypertrophic cardiomyopathy causes the heart muscle to thicken, making it harder for blood to leave the heart.

Today, Erica jokes that if Elayna ever gets out of line, all she has to do is remind her daughter that she died to bring her into this world.

Jim Malloy was a 75-year-old retired engineer passing the time as a “medical actor” at the University of Virginia School of Medicine. He’d play a wide range of diseases, disorders, and conditions for the students to diagnose. But the role of a lifetime came in February of 2013—and it saved his life.

Malloy was assigned to read for abdominal aortic aneurysm (AAA), also known as the “silent killer.” The condition can develop for years with no symptoms. The blood vessel simply grows unnoticed until it bursts, often killing the patient. Malloy performed the part to perfection, complaining of lightheadedness and stomach pain. It was so convincing, in fact, that when the student pressed on his abdomen and told him that he had an aneurysm, Malloy thought it was all part of the show.

“It was an amazing coincidence that he was volunteering for that case. If he had been pretending to have anything else, I wouldn’t have done that part of the exam, and I wouldn’t have found it,” says Ryan Jones, the student who diagnosed Malloy. “He was in the right place at the right time.”

When you go into surgery, the last thing you want to wake up to is being surrounded by flames. Fortunately, when that happened to Enrique Ruiz, it wasn’t because he’d died and found himself walking the road to Halifax. Unfortunately, it was because he was on fire.

Ruiz had gone in for a tracheotomy to have a breathing tube inserted. During the procedure, the chief of surgery’s electronic scalpel set off some sparks which came into contact with the oxygen supply, creating a “minor explosion.”

Surgical fires are nothing new in hospitals; the FDA estimates that “550 to 650 surgical fires occur in the United States per year.” No, what’s really disturbing about this fire is that the hospital attempted to cover it up. Even though Ruiz suffered second-degree burns, the surgeon omitted the injuries from the post-surgery report, claiming that the fire had been extinguished “no danger to the patient.” One doctor tried to tell the family it was nothing serious, comparable to a sunburn.

Brothers Edgar and Alcides Moreno were 47 stories high washing the windows of a New York City skyscraper when their platform broke and plummeted to the streets below. The brothers fell some 500 feet, reaching an estimated speed of 124 mph. Edgar died on impact. Alcides survived and was rushed to the hospital, where he underwent nine orthopedic operations.

During his stay in the hospital, his wife visited every day and lifted his hand to stroke her face, hoping it would trigger something in him and wake him up. In a scene straight out of a Hallmark Channel original movie, Alcides gained consciousness enough on Christmas Day to reach out for himself—accidently stroking a nurse’s face, not his wife’s.

“Fifty percent of people who fall four to five stories die,” said Dr. Sheldon Teperman, director of trauma and critical-care surgery at Jacobi Medical Center in The Bronx. “By the time you reach 10 or 11 stories, just about everyone dies.” Alcides not only survived but made a full recovery; today he enjoys taking part in walks for charity.

Dr. Philip S. Barie, the chief of the division of critical care at New York-Presbyterian/Weill Cornell Medical Center in Manhattan, told the press, “If you are a believer in miracles, this would be one.”

In this time of modern medicine and vaccines, Americans . . .

If anyone’s ever doubted whether patients are more than . . .
Tweet
Older Posts Newer Posts