The COVID-19 pandemic has been a defining time for many people and nations around the world. Whether you know someone who has been infected by the virus or not, everyone’s way of life is being affected, from wearing a face mask in public to limiting social gatherings and restricting dine-in restaurant services. However, we are still in the midst of the pandemic, and its full impact on history will not be known for some time. Here, we took a look at the global pandemic history to see how detrimental each was to the human population. 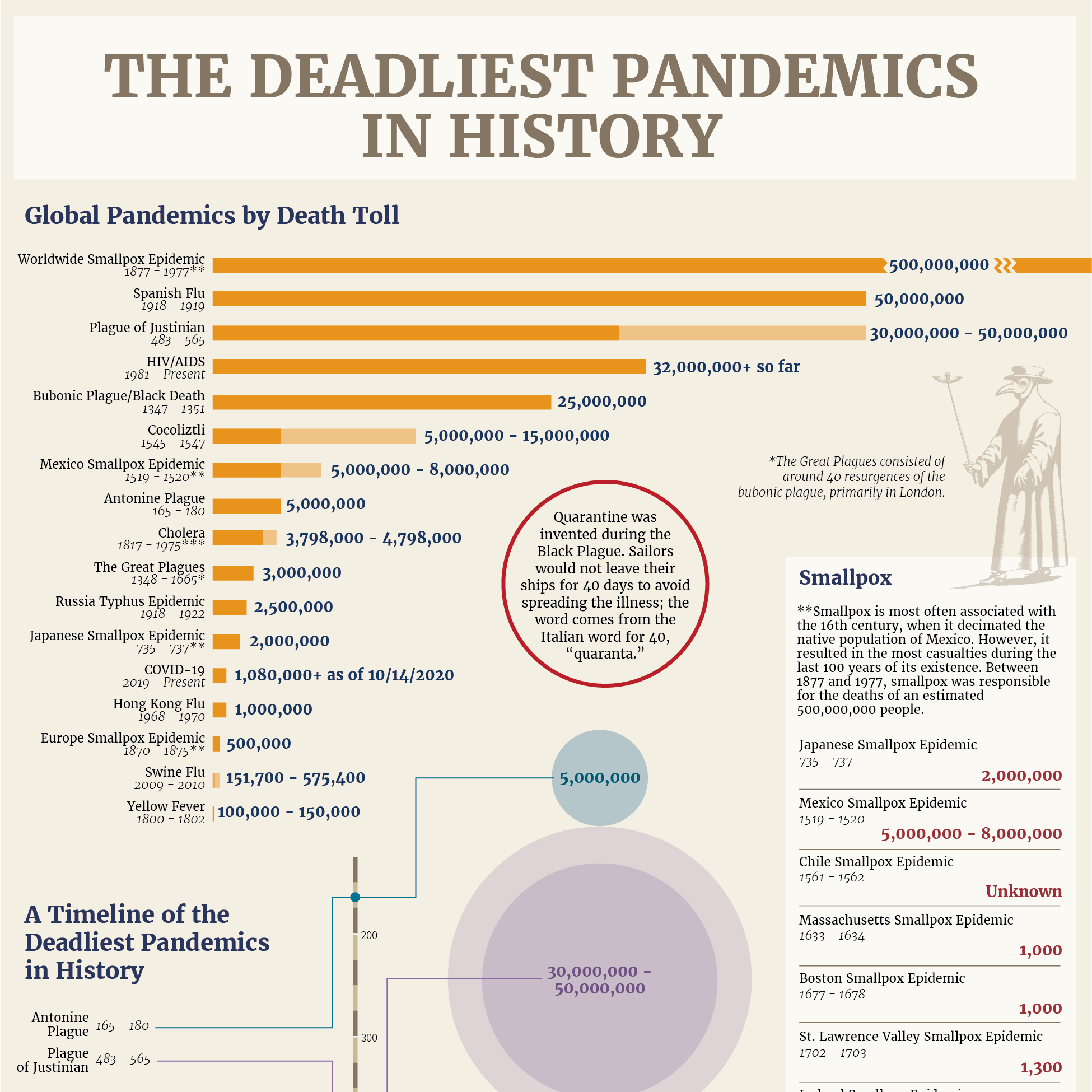 The COVID-19 pandemic has been a defining time for many . . .

Past pandemics that are commonly taught about in schools were associated with either smallpox or Yersinia pestis. Yersinia pestis is a bacterium that was responsible for the Bubonic Plague, also known as the Black Plague. The Black Plague death toll was around 25 million people, and there were also several resurgences over the course of the following 300 years, leading to millions more casualties. Yersinia pestis is also thought to have been responsible for the Plague of Justinian, one of the earliest recorded plagues, between the years of 483 and 565.

Smallpox has killed more people than any of the other pandemics in history. The best-known smallpox epidemic was between 1519 and 1520 in Mexico. It’s said to have claimed roughly 80% of the native population. The total number of casualties is estimated between 5 and 8 million. However, between 1877 and 1977, smallpox killed more than 500 million people.

The Spanish Flu, another of the worst pandemics in history, had a much faster death rate than smallpox: It killed more than 50 million people between 1918 and 1919.

To say that COVID-19 is the most significant pandemic of our lifetime is up for debate, but it’s certainly the fastest-spreading. However, HIV/AIDS has been responsible for far more deaths, more than 32 million since 1981. COVID-19 has killed more than 1,080,000 people in less than a year. The diseases are different in many ways, but due to the airborne nature of COVID-19, it has led to nationwide quarantines in many countries. It has affected the way of life of people all across the globe.

Throughout global pandemic history, mankind has developed new ways to prevent and fight pandemics over time. During the Black Plague, sailors would remain on their ships for 40 days. This is the first recorded evidence of quarantines, and the word “quarantine,” derived from the Italian word for 40, remains from that era, even though it’s not necessarily 40 days long anymore. We’ve also developed vaccines, with the first one invented to combat smallpox. Dr. Edward Jenner discovered that patients infected with cowpox, a much milder illness, seemed immune to smallpox, so he began exposing healthy people to cowpox. Today, vaccines are an essential method of disease prevention. In fact, widespread vaccination against smallpox led to the eradication of this illness.

The COVID-19 pandemic has been a defining time for many . . .

The HIV/AIDS epidemic, 30 years ago, was an interesting . . .
Tweet
Older Posts Newer Posts