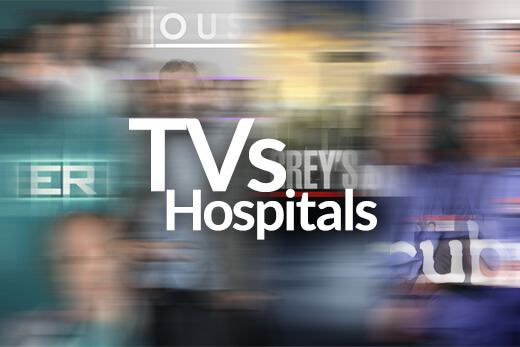 As a nurse, you know the ins and outs of a hospital better than your average med show binge-watcher, including the moments when they add a little extra blood or romance for drama’s sake. To be fair, for a TV show to depict a profession 100 percent accurately, it would have to be a documentary, and even those are suspect at times. But there are some shows that push the envelope of believability when it comes to the goings-on of hospital life, especially when the viewer is in the know. See if your favorite medical show made it on the list of questionable TV hospitals.

Patient Safety and Assessment: Safe Use of Assistive Devices

The purpose of this course is to provide healthcare pro . . .

One of ER’s biggest problems is common to hospital dramas: an over-emphasis on physicians at the expense of nurses. Only one main character was ever a nurse, as compared to the eight to ten physicians that led the episodes. Consequently, we saw physicians doing tasks normally assigned to nurses, such as defibrillation or triage, and nurses reporting to physicians rather than nurse managers. The overall impression was that nurses were somehow inferior to physicians.

In protest, nursing students and professors wrote to the writers of ER and said, “While perhaps understandable in light of the relatively low level of understanding about nursing among even the best educated members of our society—including even some other health care professionals—such portrayals may have the unintended consequence of conveying negative impressions of nursing to current and potential nurses and the public.” This is one hospital drama that could’ve used a little improvement in the nursing department.

This series asked, “But what if Sherlock Holmes had gone to medical school?” Its answer came in the form of the abrasive, pill-popping, and perpetually scruffy Gregory House (Hugh Laurie). The lead character’s disregard for the rules is only appropriate, given how frequently the show disregarded basic medical practice, like the time he opened a patient’s chest and increased his blood pressure until blood spurted out, just to prove that the man had an aortic aneurysm.

On his blog, Polite Dissent, physician Scott Morrison has graded every single episode of House on an A to F scale, based on accuracy. Out of the series’ 176 episodes, only four earned an A grade. The vast majority of episodes came in at a C, which, Morrison says, places the series “miles above any other show out there.”

This show is probably better known for its steamy office romances than for its depiction of medical practice. It’s not uncommon on the show for doctors to bed nurses, nurses to bed interns, and patients to disrupt relationships wherever they can. The actual treatment of patients takes backseat to all this drama, so it suffers accordingly.

Amanda Kirzner, DO, remembers, “During my intern year, my biggest pet peeve was watching the interns on the show go into the operating room for big, complicated cases such as brain surgery every day. Typically, interns on a surgical service take care of the patients on the floor. They rarely see the inside of the OR, and when they do, it’s usually to assist with an emergency or a run-of-the-mill case.” So with all of these shows sacrificing realism for drama, are there any hospitals that measure up?

Surprisingly, comedy comes the closest to the truth. Despite its often surreal nature, Scrubs has been praised as the most accurate hospital on TV. Instead of focusing on big, dramatic cases, Scrubs focused on how hospital staff dealt with the smaller, day-to-day cases. Creator Bill Lawrence was inspired by stories from his friend and show medical advisor Jonathan Doris, and writers would collect anecdotes from doctors to use for possible stories.

Realistic or not, something about these shows keeps us coming back for more. It’s nice to escape from reality every now and then, just so long as our patients don’t hold us to the same standards as Hugh Laurie or John Stamos.

Patient Safety and Assessment: Safe Use of Assistive Devices

The purpose of this course is to provide healthcare pro . . .