Nurses in the American Revolutionary War 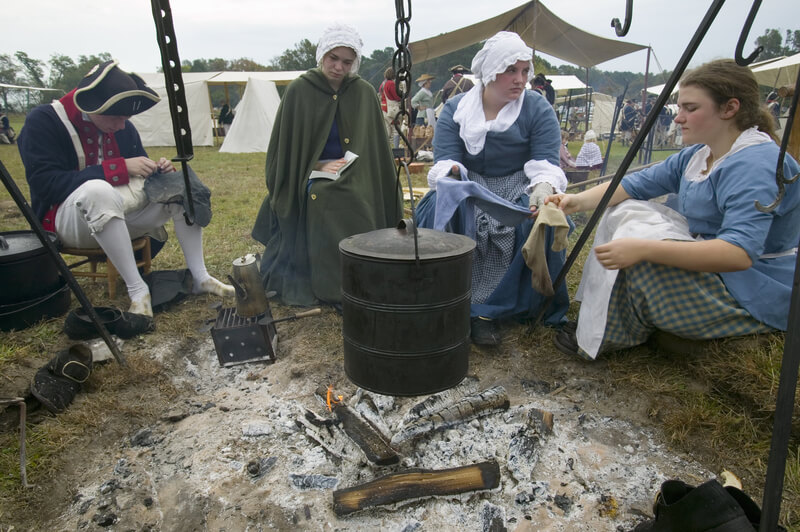 “I may be compelled to face danger, but never fear it, and while our soldiers can stand and fight, I can stand and feed and nurse them,” said Clara Barton, founder of the American Red Cross.

It seems most nurses share this feeling, and although medicine was in no way sophisticated by the time of the American Revolutionary War, men and women did what they could to care for the soldiers under their watch.

At the beginning of the war, women (now known as “camp followers”) would follow soldiers from battlefield to battlefield in hopes of staying near their loved ones and benefiting from the care and services of the Army. While some argued their presence was a nuisance and a distraction, General George Washington couldn’t deny the truth: They needed women to perform other duties on the war front so that men could be free to fight. Washington wrote to government leaders, asking for permission and money to employ women in order to keep men on the battlefield and keep the camps running.

Nursing during the Revolutionary War was one of the many duties asked of women, many of whom had no medical training or education. The brave men and women that provided medical care lived under the extreme conditions that come with war, but considered it a privilege and duty. While medical expertise and technology were minimal, advances in care and sanitation made leaps and bounds during this time.

The Roles of Women

It was not typical for women to play a role on the battlefield during times of war, but the soldiers of the Continental Army needed their help. Their services allowed more men to be soldiers, and looking at how the men and women served alongside each other paints a bigger picture of the war environment. Let’s explore some of the women’s responsibilities during the Revolutionary War, including nursing and how it became an option for both women and men.

Many women earned a small living by doing laundry and sewing for soldiers. They earned supplies and wages on a per-item basis, and the Army kept careful tabs on how much women could charge for these services. West Point officers demanded that “the following Prices be paid for Washing; to the Women, who draw provisions, with their respective Companies, For a Shirt two Shillings; Woolen Breeches, Vest and Overalls, two Shillings, each; Linen Vest, and  Breeches, one Shilling, each; Linen Overalls, one Shilling and Six Pence each; Stock, Stockings and Handkerchief, Six pence each; the Women who wash for the Companies, will observes these regulations.”

The Army also paid careful attention to make sure women didn’t wash clothes in the same rivers men drank out of, or wash them within the camp’s living quarters.

Cooking and Other Chores

Another responsibility women took on during the Revolutionary War was cooking. “When soldiers entered the Army, they formed ‘messes,’” History.org explains. “These messes were generally composed of six men who shared housekeeping chores, including getting water, chopping wood, and cooking meals. However, on occasion, women of the regiment earned extra money by cooking for men who could afford to pay them.”

Because men were so needed on the battlefield, it was a welcome solution to have women serve as nurses, but quite out of the ordinary. Despite the opportunity to earn money, nursing was a dangerous and low-reputation job. “Officers therefore alternately bribed and threatened women to take up nursing” by enticing them with payment or taking away food from women who refused to nurse.

There was quite a bit of leeway when it came to allowing nurses to serve, whether it be overlooking their lack of medical experience or even accepting British-associated nurses. Interestingly enough, about 20–30 percent of Americans didn’t support America becoming independent from Britain. These loyalists did what they could to promote the British Army, creating even more of a divide among the population. One such loyalist, Elisabeth Brewer, found a unique way to support her king: She left her post as a nurse for British soldiers in New Jersey and “defected” to the Continental Army. After passing interrogation, she was permitted to nurse for the Revolutionary side. Two months later, she was discovered and charged with espionage.

Two of the most notable women at the time were Martha Washington and Abigail Adams. Martha carried supplies to soldiers from Mount Vernon, traveled to war zones with her husband, and set up a sewing circle with officers’ wives. One witness recounted, “I never in my life knew a woman so busy from the early morning until late at night as was Lady Washington, providing comforts for the sick soldiers.” Abigail also served as a nurse and supply deliverer, as well as an ammunition producer.

“Some historians believe that women’s participation in the American Revolution contributed to the emerging role of Republican Motherhood which assigned women the responsibility for the moral training of their sons for citizenship and which led to the expansion of educational opportunities for women,” says Women in Military Service for America Memorial Foundations, Inc.

The Revolutionary War was a pivotal point in re-establishing the role of men and women, particularly in the Army and the workforce. Nursing, in particular, proved to be a demanding but rewarding responsibility for men and women during the war.

Nursing Conditions of the Revolutionary War

Providing medical care during times of conflict is never easy, but considering the lack of medical and sanitation knowledge of the time, nurses in the Revolutionary War had a particularly difficult task. In addition, they were living under truly poor conditions. While the root of the Revolutionary War was a conflict that ran deep, it united people to fight and care for the causes they felt passionate about. Between the organization, rank, and lifestyle of the average nurse, it’s safe to say their sacrifices were heroic.

In 1775, General Horatio Gates of the Continental Army told George Washington that “the sick suffered much for want of good female Nurses,” which prompted Washington to advocate for more nurses. Congress then approved one nurse per ten patients. In addition, one matron (or chief nurse) was assigned 100 soldiers to oversee. Congress also permitted hospitals to be organized. At times, certain hospitals provided care and provisions for nurses and their children.

While this plan was greatly needed, it was also a huge expense to the Army—it now had to provide food and payment to even more people. Just as Congress struggled to pay its soldiers, paying medical professionals was a constant source of conflict for the Army. While male doctors were paid 40 dollars per month, nurses were given just two dollars per month, but this was eventually raised to eight dollars to encourage more nurses to volunteer. For nurses serving British soldiers, pay was 13 shillings per month.

Rations given to both soldiers and nurses were usually made up of some sort of meat, bread, beans or vegetables, milk, rice, beer, molasses, candles, and soap.

SocialStudies.org states, “All nurses had to confront the hostility of physicians and the belief that no decent woman would nurse a man outside her immediate family.” Female nurses, who were still considered civilians, were not included in the military chain of command. Sometimes this worked in their favor—they weren’t always required to abide by the same rules. Other times it was harder for them to be taken seriously by military personnel. However, some women who ran military hospitals were given the title of captain.

Being a nurse might have provided job security, but nurses were constantly faced with dangers like smallpox, fever, and other health risks. “While surgeons and surgeon mates performed most of the skilled medical duties, female nurses did mostly custodial work, feeding and bathing patients, emptying chamber pots, cleaning hospital wards, and occasionally cooking,” says historyofmassachusetts.org. They also changed linen, swept, disinfected hospitals with vinegar, combed hair, and were demanded to stay sober. Nurses provided many of the essential duties that kept the hospitals and camps running.

One thing is clear as we study the lifestyle of Revolutionary War nurses: Military personnel and medical professionals depended on each other. It served as a good learning experience for future standards and procedures in military organization. 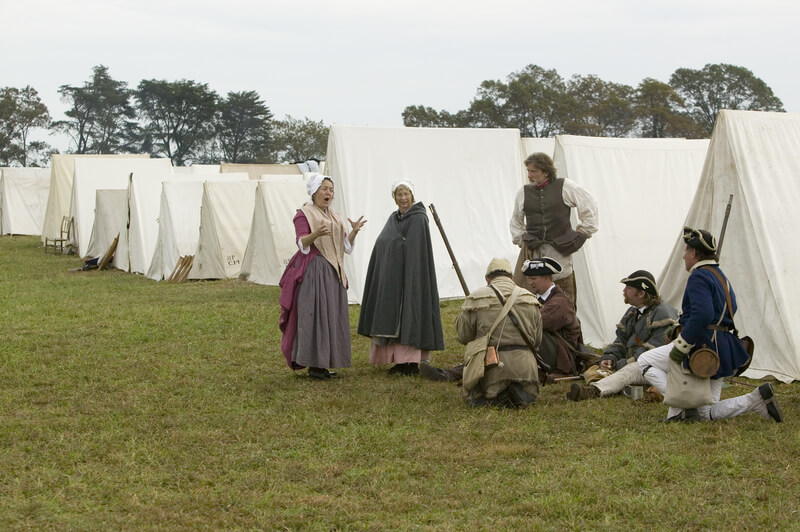 Medical Conditions and Advancements in the Revolutionary War

Imagine working in a medical environment like this: “Doctors’ knowledge of medical issues was very basic (and often flawed) compared to medical knowledge today. Doctors and nurses were hard to come by, few specialized in any particular topic, and many lacked formal training. Hospitals were few and far between, tools were rudimentary, and much was yet to be discovered about the causes and treatments of common ailments.” Combine all this with the fact that Revolutionary War soldiers and medical staff were living in close quarters and dirty living conditions, and they were often given contaminated food and water.

The American Revolution put nurses to the test, and there’s a lot we can learn when we look at their methods and advancements.

As was often the case in war, treatment could be a greater cause of death than battle wounds. In fact, about 50 percent of soldiers who underwent surgery died. Doctors had minimal solutions for treating injuries, and even fewer that worked. Some of their attempted healing methods included bloodletting, unsanitary amputations, and chemical administration with toxic substances like mercury. “The famous physician and founding father Benjamin Rush was known to treat patients by wrapping them in vinegar soaked blankets in conjunction with mercury baths and cold baths,” says Qmed.

While many techniques doctors used during the war were potentially harmful, some new discoveries paved the way for improved treatment. For example, surgery benefited as doctors determined lint, compresses, tourniquets, and dressings could be used to stop bleeding. They also discovered that substances like myrrh could clean wounds.

Nurses made inventions of their own, including stone hot water bottles, combination lamps and food warmers, feeding cups, wheelchairs, and chairs with fans. They even got creative with food. “A popular part of the patient’s diet provided by nurses was warm ‘pap’ (milk in which oatmeal had been cooked and strained and to which beaten egg yolks, butter, and orange flavor were added) and beef tea, an extract of beef juices.”

Despite the obstacles before them, doctors and nurses did their best to care for soldiers and make their contribution to the medical field.

Nurses in the Revolutionary War serve as a grand example of the sacrifice and dedication the medical community needs. Studying their conditions brings a whole new level of appreciation to the tools and technology at our disposal today.