Nursing in the Military: "Thank You for your Service" 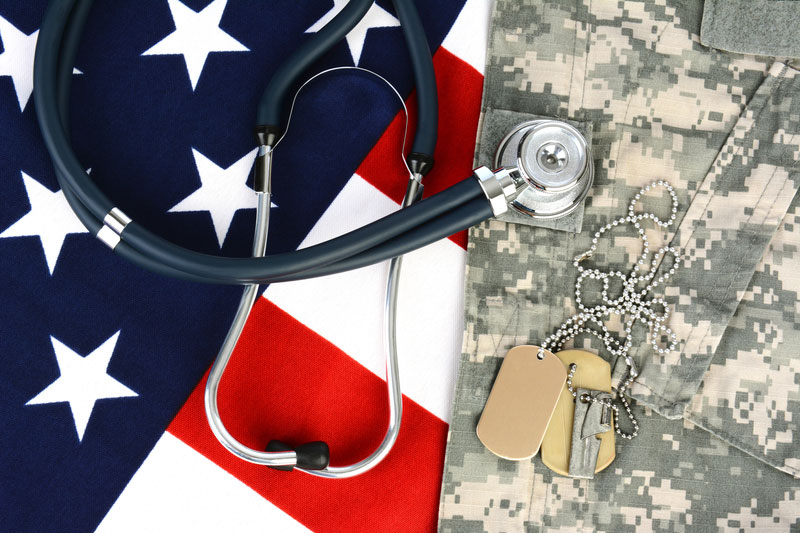 Nurses in the military have been an essential part of our American Armed Forces since the American Revolution. Their dedication in aiding the injured and ill, along with their service to the United States, deserve our respect and appreciation.

From the beginning, where military nurses were “volunteers” that wished to follow and care for their loved ones during battle, to the decorated veterans of today, we owe our thanks and gratitude to their selfless acts of heroism and courage to protect and mend our soldiers.

During the American Revolutionary War (1775-1783), women known as “camp followers” would volunteer assistance with laundry, cooking, chores and nursing. “They provided essential duties that kept the hospitals and camps running”. Even though, many of the women did not have any medical training, their aid for the soldiers proved instrumental in what would later be our military nursing corps.

As the Spanish-American war began, in 1898, the U.S. military requested nursing aid for the massive amount of injured and ill soldiers. They received hundreds of applicants, but it became increasingly obvious that recruiting trained nurses to the Medical Department of the Army, would be a greater challenge. When Anna Caroline Maxwell offered her assistance, it was a much needed solution.

Anna Caroline Maxwell, known as the “American Florence Nightingale”, was instrumental in the establishment of the Army Nurse Corp. She obtained the majority of her nursing education at the Boston City Hospital Training School for Nurses, were Linda Richards, the “first professionally trained American nurse” was teaching.

During the Spanish-American war in 1898, Maxwell facilitated taking trained nurses to military hospitals to care for casualties. By demonstrating her ability to direct and aid over 150 nurses in caring for soldiers in areas of poor sanitation, typhoid fever outbreaks, malaria and measles, she gained the attention of the commanding officers and the United States Congress, which lead to the establishment of the Army Nurse Corp in 1901.

Due to her military service and establishment of the Army Nurse Corp, in January of 1929, Anna Caroline Maxwell was one of the first woman buried in Arlington National Cemetery with full military honors.

Expanding the reach of nursing in the military:

In 1908, Congress established the Navy Nurse Corps. Twenty women were selected to be assigned to the Naval Medical School Hospital in Washington D.C. These were the first women to serve in the Navy and were known as “The Sacred Twenty”.

Lenah H. Sutcliffe Highbee, one of the “Sacred Twenty”, was the first female recipient of the Navy Cross for her contributions during World War I, for extraordinary heroism. She rose in rank to Second Superintendent of the Navy Nurse Corps, helping recrute over 1,300 nurses to the corps. She was quoted as being “a soldier, fighting pain, disease and death with weapons of science and skill”.

In 1944, the Naval destroyer, USS Highbee (DD-806), was named after Lenah H. Highbee in honor of her service. This was the first U.S. Navy warship ever named after a woman. The destroyer fought gallantly during World War II, the Korean War and Vietnam War and as stated by the U.S. Naval Institute, “mirrored her namesake’s resilient, unwavering, and energetic nature”.

In 1947 nurses in the Army Nurse Corps and Navy Nurse Corps were officially granted permanent commissioned officer status, allowing them to receive full rights, privileges and pay that came with their rank.

The influence of military nursing is not only found on the battlefield, but in our nation's policies and improvement of services provided to civilians under the care of our military. Ethel A. Hoefly demonstrated with her determination for continued education and consistent improvement, military nurses would help mold the future of our healthcare.

Ethel Ann Hoefly served in the United States Army Nurse Corps during World War II, and in 1949 transferred to the US Air Force. She was the first Chief Nurse promoted to the rank of brigadier general on June 11, 1970. She served in the capacity as Chief Nurse of the USAF Nurse Corps from 1968-1974. She was described by Col. Gloria Twiley as being “a pioneer in flight nursing” and “a roll model… who inspire me to serve my country with passion”.

Brigadier General Ethel A. Hoefly is credited as being a “major influence in the development of the Air Force Nurse Corps from 1969 through 1983”, as stated by Major General Melissa A. Rank of the USAF. She provided insight to the evolution of the Pediatric Nurse Practitioner program, which allowed nurses to assist patients during the Air Force’s physician shortage. This enabled them to expand their role and abilities to provide care in military treatment facilities, which were formerly only conducted by physicians. She was instrumental in having  nurses perform “well baby clinics” at military treatment facilities between 1974 and 1975. An astonishing 19,042 patients, among four facilities, were seen by the Pediatric Nurse Practitioners during this time.

With the appointment of U.S. Army Nurse Rear Admiral, Sylvia Trent-Adams, as the acting Surgeon General of the United States, from April thru September of 2017, the role of military nurse, is endless in it’s reach.

From November of 2013 to May of 2016, Trent-Adams served as the Chief Nurse Officer of the U.S. Public Health Service and is currently the Deputy Surgeon General, after a short time as acting Surgeon General. She is responsible for “communicating the best available scientific information to advance the health of the nation” as stated by the U.S. Department of Health & Human Services.

She has been instrumental in the training for health care professionals and in educating the public regarding HIV, as she was previously the Deputy Associate Administrator for the HIV/AIDS Bureau, Health Resources and Services Administration.

On the horizon for military nursing:

Nursing in the military, from its original conception to the institution it is today, with advancements in technology, skills and ingenuity, our nurses continue to grow in their ability to better care for their patients. Nursing is a never ending pursuit of education and caring. The dedication for the art of nursing is an honorable trait, and as show by history, a necessity.

To all of our nurses, military or civilian, thank you for your sacrifice, determination and courage to forge forward to make life better for us all. Nursing is a calling, not everyone has what it takes to succeed in such an environment, for those in the past and those in the future, we are all grateful for your service. Thank you.